There has been a small invasion of Waxwings into the country this winter. With a bit of effort and good luck we managed to colour ring 100 in Aberdeen and Inverurie before Xmas.

Some have stayed and some have gone.

It was great to hear about our first movement away from Aberdeen on 2 December 2019 when group member Euan Ferguson received news of right leg metal over yellow, left leg dark green over white over red, photographed in Blyth Civic Centre, Northumberland by Tom Tams (see photo). It had been ringed as a rather handsome adult male in Kincorth, Aberdeen on 23 November, noted as even having faint waxy tips to his tail!


Other birds have been reported moving down through Scotland and into England (see map of colour-ring sightings). 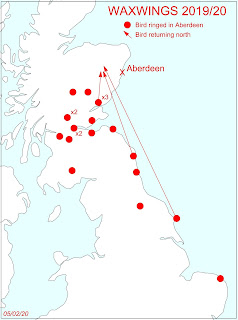 An email from Harry Scott on 3 February said he’d had a lady phone him from Alford (40km NW of Aberdeen) to say she had picked up a dead colour-ringed Waxwing beneath her window. She said the colours were green, white and red but, unsure of the order, we thought it was probably a bird ringed at Strachan (30km SE of Alford) just a few days previously.

Alas on delivery and inspection it turned out to be the handsome male photographed down in Blyth in early December. The photo of the dead bird shows close up just how handsome he was, with the faint waxy tips to his tail also visible. Such a sorry end for such a beautiful bird. Windows are the death of many a Waxwing.


It was actually quite a surprise to see him back up here around Aberdeen (and so quickly). Waxwings returning north are fairly unusual, at least amongst the several thousand we have colour-ringed over the years. Some wander over to the continent but most in the UK seem to depart from where they end up during the winter.

This invasion however, with a very high proportion of adults, does appear to be a little different in that this is our third bird returning north. Others were sighted in Dundee and at Flamborough Head before recently being resighted back up here.

We have also had two returning birds from previous invasions, a bird ringed in spring 2013 which we didn’t quite get the full combination of (name your drink if you get it on your camera!) and another ringed three years to the day in 2017 in Aboyne, resighted 15kms away in Strachan on 28/1/20.

There’s still a couple of months before they depart back to Scandinavia so if you hear of a Waxwing flock near you we would be very grateful if you can check for and report any colour-ringed birds you see. We are out most weekends checking our flocks for colour-ringed birds of which there are a few but it is clear that many have moved on. Please report them to grampianringing@gmail.com and/or rduncan393@outlook.com

Posted by Grampian Ringing Group at 14:27