Every winter we hold a several ringing demonstrations for local schools and wildlife clubs. The Phoenix Group sessions are becoming legendary as everyone aims to let the most viscous blue tit go! Below are some pictures of the most recent session earlier in the month as well as some from last year’s sessions; at one we were lucky enough to catch an adult buzzard.
These sessions are always good fun and we usually have a good game of fitba too! 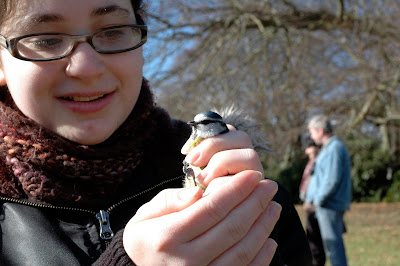 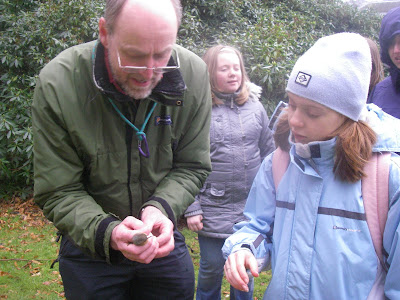 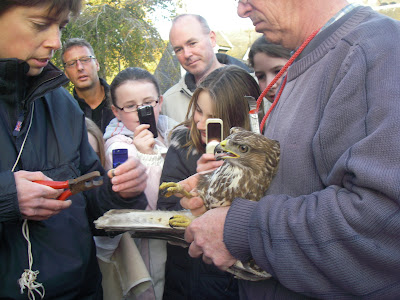 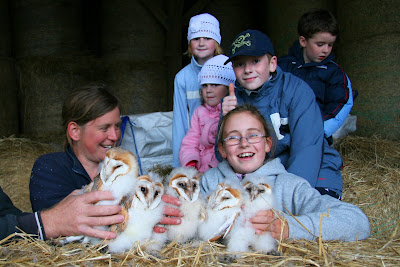 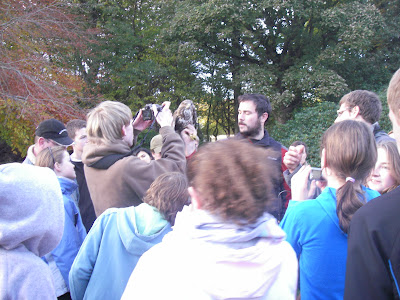 Posted by Grampian Ringing Group at 15:24 No comments: 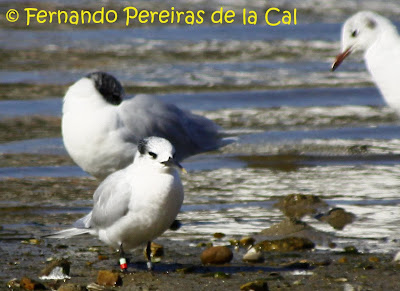 This great picture was taken on 9 March at Santa Cristina Beach, Oleiros, A Coruña, NW Spain by Fernando Pereirasn de la Cal. It's a bird from the Sands of Forvie colony rung as a chick in 2008.

Each year we assist Alistair Smith in ringing a proportion of chicks with a year class code to determine fledging success and subsequent survival and site fidelity. This will probably be a bird on its way back to the colony for the first time.

Thanks again to Fernando for taking the picture and sending it on.
Posted by Grampian Ringing Group at 10:39 No comments:

The totals for 2009 are in. The top 10 fully grown species to be ringed in Grampian last year were:

A new breeding “colony” of greylags appeared in Glen Gairn in the early 2000s. In an effort to determine where these birds may have originated from and where they winter, an effort was made in summer 2008 to catch and neck collar some of the goslings. To cut a long story short, when we approached the family crèche of about 40 birds in mid July, they nearly all used that basic fundamental skill and ability known to most birds as flight and merrily took off and flew around and away. There were however 2 stragglers which we managed to catch and collar. On release one made a u-turn and white water rafted away down the river. Both have since been resighted back at the breeding area in 2009 and in the last few weeks by several observers still together at Tarland, c15km away from their breeding grounds. 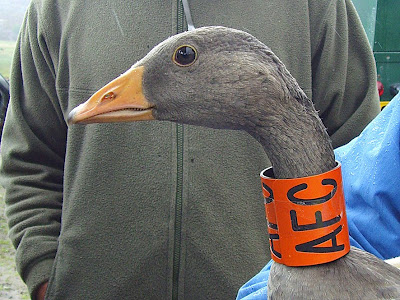 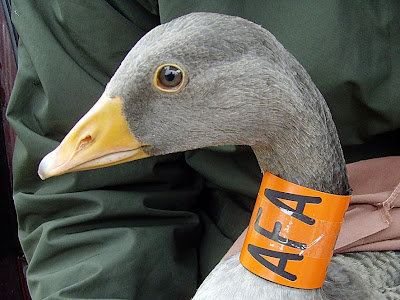 We chose the collar AFA because it is a local Aiberdeen Doric dialect word meaning awful or very while AFC is a local abbreviation standing for an “Afa Fitba Club” (better known as Aberdeen FC). As Skitts says if we could use the collar ARE we could have AFC ARE AFA…..but the letters R and E aren’t used on collars….shame.
Posted by Grampian Ringing Group at 10:45 No comments:

Whilst oot and aboot, Walter again proved himself as a star spotter for colour marked birds! With a sighting of a collared Greylag Goose near Kintore. 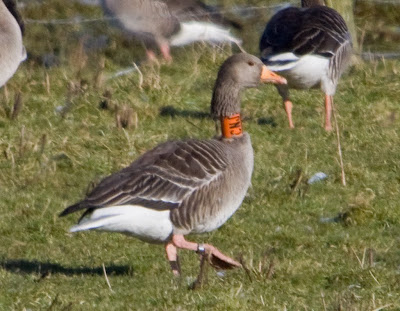 CNJ was feeding near the road in a flock of about 300. Speedy information from Bob showed that it was originally ringed and collared at Loch Eye in 2005. It has been seen in Grampian a couple of times as well as on the Icelandic breeding grounds last May.
Posted by Grampian Ringing Group at 09:25 No comments:

There roughly 150 corn buntings in the flock of about 800 birds at Old Rattray. The majority were reed buntings of which we caught 134. One corn bunt caught out of 150 highlights how difficult they are to catch compared to reed bunts. We got close a few times but they always just missed the net, rising from the crop higher than the reed bunts and heading for the tops of the nearby trees, rather than diving into lower cover (and nets).
The crop is a specially targeted mix for buntings, including three grain types and some brassica. Earlier in the winter there were 1200 birds using the crop, comprising of mainly buntings, with 400 yellowhammers and 600 reed buntings but only 20 corn bunts. During the second cold snap with snow, there seems to have been a distinct departure of yellowhammers from many of these crops....not sure where to? 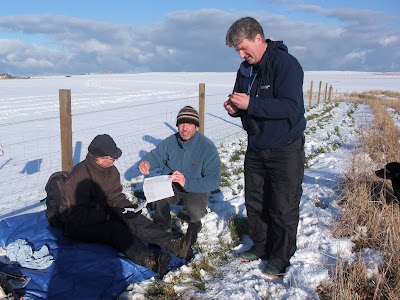 There was inevitably a few raptors around the flock during the ringing session, including two merlins, sparrowhawk, kestrel, buzzard and hen harrier. The next day, most of the corn bunts had shifted to the cover crops at Starnafin at the Loch of Strathbeg RSPB reserve. The crops here are very similar to the Rattray one and include some of the same seed mix. They hung around for a few days and I managed to see our green and white ringed female near the visitors centre, but more supinely staff reported red over red, which was the first corn bunt we ever ringed as an adult in 2004 about 20km away!
Thanks to Chris Jones for his pictures from the day.
Hywel 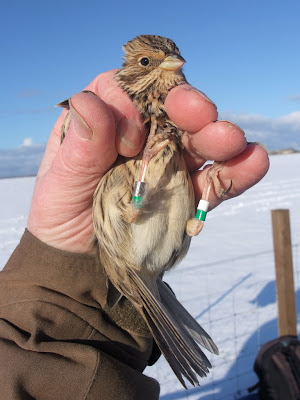 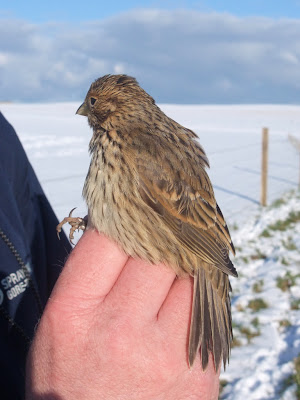 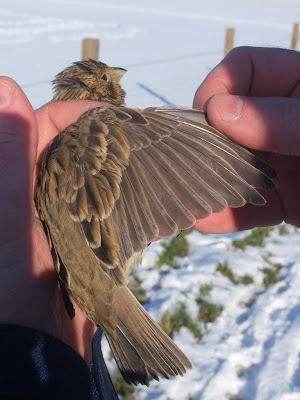 Posted by Grampian Ringing Group at 11:09 No comments: