Its been a long winter waiting for any sign of a waxwing invasion, but at last a few have arrived. Chris, Walter and Ann caught three birds today in Kintore so keep an eye out for these now colour-ringed birds if move through the country. 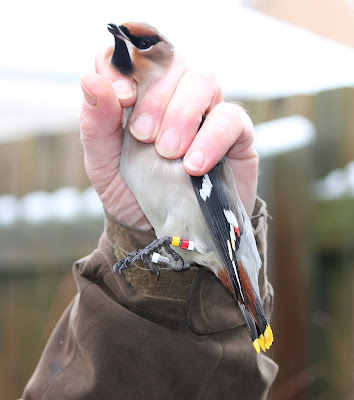 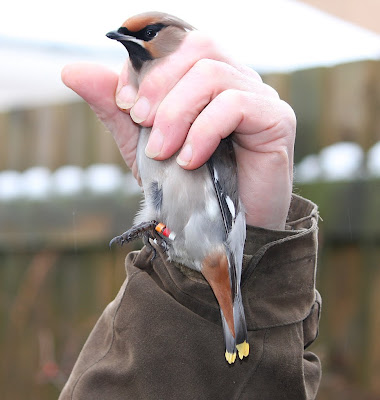 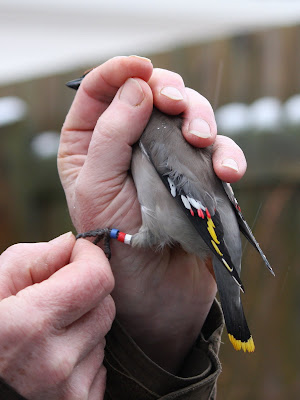 White/Red/Blue
Posted by Grampian Ringing Group at 18:16 No comments:

Raymond Duncan has suggested that I put this info on the blog as he feels that it will be of interested.

Last year my Ann and I were lucky to have the pleasure of appox 22 Waxwings in our garden for about 16 weeks. On Raymond's advice we "spiked" apples on various trees in our garden and every day without fail they turned up and ate us out of apples. I'm scared to think what we spent on apples for all those weeks - but it was certainly worth every penny.

We assisted Chris Jones and Derek Robertson to trap and ring 32 Waxwings in and around our garden. And then sadly they all left. This year as you will know has been a very poor year for Waxies. We have had one in the garden for about 2 week until yesterday when we had 4. But the really good news is that one was ringed and it was a last years coloured ringed bird. 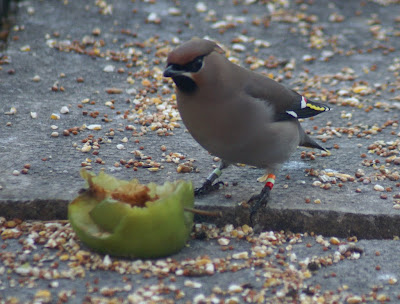 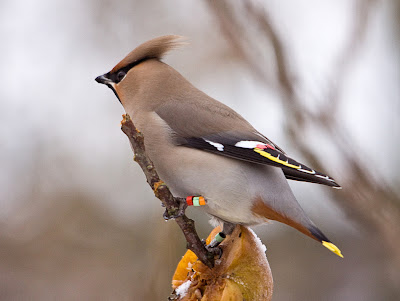 I hope this is of interest to you as it certainly makes ringing all the more worth while.

Walter
Posted by Grampian Ringing Group at 14:55 No comments: 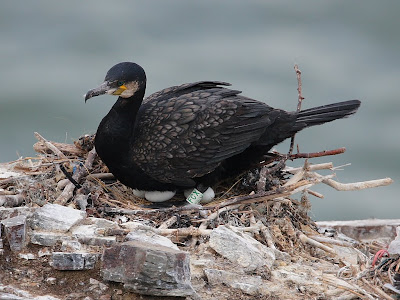 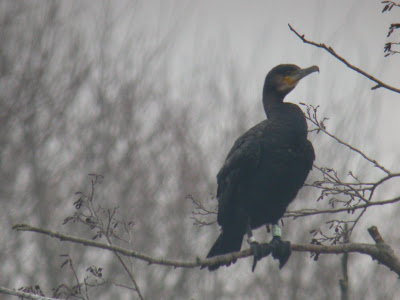 Photos at home on the nest (Chris Jones) and away (David Gray) shown.

The always long-awaited pack of recoveries arrived last week on Raymond's doormat. Among the usual Shag and Cormorant darvic sightings there was the information back on a few birds we had been waiting for.

Oystercatchers
This included information back on another of the three controls we caught last March near Aboyne in the big oystercatcher catches. One was a bird ringed in 2001 at Llanelli Docks as an adult. Another bird from this catch was found dying locally in summer 2009 by a member of the public. 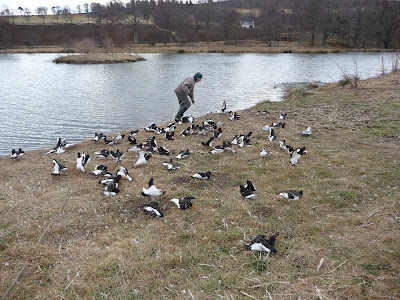 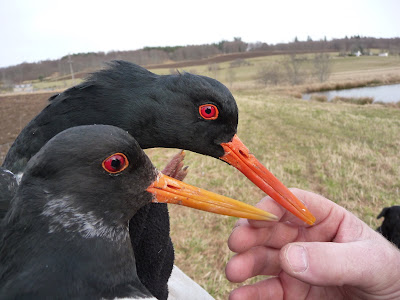 Starling
Finally a report back on a Westhill control Starling caught in March 2009 which was a bit of an abmigrant having been ringed in Wick in January 2008. 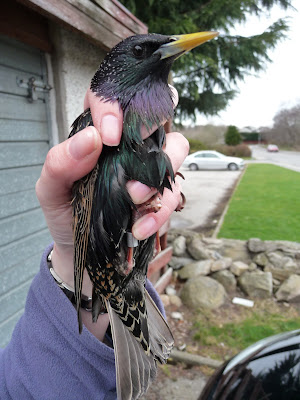 Tawny Owl
Another interesting one is a tawny owl chick that was ringed by John Massie in June 2008 that was found dead on the road in Buckie, 54km away in July 09. Quite a distance for a tawny owl!

Swallow
Star bird goes to an adult male swallow ringed at flick-netting on the banks of the Dee in 2004, recovered in Dundee, dead last November. Not much you might think but its Wasbank, Dundee, Kwazulu Natal, SOUTH AFRICA! Thats 10,000km eachway, each year since it was first ringed making 100,000km clocked up in the last five years - WOW!
Posted by Grampian Ringing Group at 20:12 No comments: