Amanda Biggins and other members of Grampian Ringing Group have been colour ringing rock pipits to study breeding ecology and dispersal. Nineteen fledged birds have been marked on the north Aberdeenshire coast (Rosehearty and New Aberdour) during autumn 2009 to spring 2010. However, the steep cliffs and breeding seabirds made it difficult to locate nests in this area.

Torry is well known locally as a deprived area of Aberdeen, notorious for it’s rough housing estates, rife with criminal activity. Situated alongside Aberdeen’s harbour, the area offers employment to migrant workers in the fish processing industry. The rocky headland of Girdleness is popular with families, dog walkers and golfers. The site offers excellent views of bottlenose dolphins and attracts a variety of migrant birdlife.

Around 15 pairs of rock pipits nest along this stretch of coastline, one of the highest densities in the region. The nests are easily accessible on grassy slopes, making it an ideal location for a colour ringing study of the species.

Nine rock pipit nests have been found so far along the Torry coastline. Five broods have been ringed, of which two successfully fledged (1out of a brood of 5 and 2/3 have been resighted). One nest failed at the egg stage and three nests are currently active.

It is likely that human disturbance has an impact on breeding success at this site, especially during hot sunny weekends. On Saturday 5th June we were surprised to find a previously unrecorded nesting strategy. The week before I had observed a pair nest building half way up the slope, to the south west of Girdle Ness lighthouse.

I enlisted Raymond Duncan to help locate the nest. Being an experienced birder and ringer he found it almost immediately. We noticed that the vegetation around the nest had been flattened, as if people had been sitting for some time at the site. Raymond was concerned that the five eggs had been abandoned. However, upon inspection we found that they were still warm.

It wasn’t until we were leaving that I noticed a unique habitat feature at the site. Within two metres of the nest was a tray of six small potted plants. Raymond, having lived a sheltered life, thought they were tomato plants, and considered taking them home to give to his mother for her greenhouse. Being a bit more worldly wise, I immediately recognised them as Cannabis sativa plants.

We suspect the birds deliberately nested close to the marijuana, and propose that getting stoned would help them ignore the hordes of picnic-eating families, dogs and drunken louts that descend on the area as soon as the temperature reaches double figures, and the nest is therefore less likely to suffer from predation.

A Scottish Natural Heritage spokesman suggested that planting more skunk in the area may be an effective habitat management tool, increasing local productivity of this understudied species. However, the plants may attract more unsavoury characters to the site, resulting in a higher probability of nests being trampled. 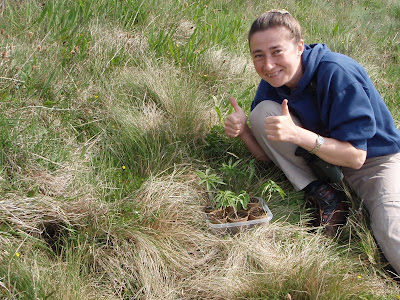 We vacated the nest site, leaving behind a packet of Rizlas, some tobacco and matches (all opened to allow access for the birds). We plan to return to try and catch the female sitting on the nest, just before the eggs hatch (we suspect that this won’t be too difficult) and will continue monitoring the fledging success of this and other nests in the area. Next year we plan to get a local to grow marijuana around a few territories to compare habitat use and fledging success with pairs that aren’t growing their own drugs.

Members of the public can help by reporting colour-ring sightings and any other birds with drug habits.

The photos show 1) Amanda and where the plants were found with the rock pipit nest to the left (in the shady hollow in the grass), courtesy of Raymond Duncan. 2) A brood of rock pipits colour-ringed at Girdleness, by Jessica Haines.

Amanda
Posted by Grampian Ringing Group at 17:24 No comments: