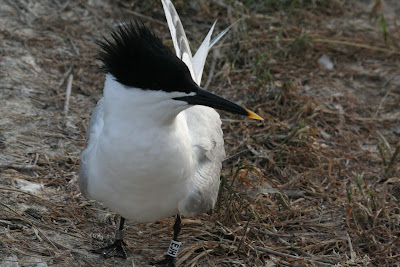 Since 2010 we have fitted inscribed colour rings (darvics) to nearly 600 sandwich terns on and around the Ythan estuary in North-East Scotland.  All but 90 have been captured as fully grown birds during the late summer and early autumn (July, August and September). During the short time since we started colour ringing them we have had 455 sightings. With the project coming into its third winter we are starting to get some really interesting results. 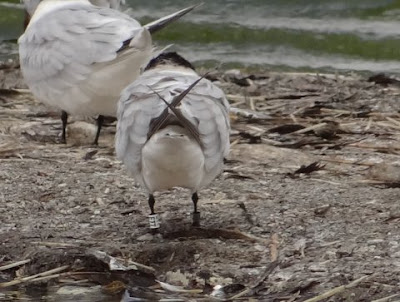 The first bird to make it back to its wintering haunts was ETT, originally ringed in September 2010 and sighted 5 times last winter in Namibia. By the time this bird had made it to its wintering grounds there were still a few stragglers in and around the UK. While a majority of Sandwich Terns winter in West Africa a small number brave the Northern hemisphere winters and we have been lucky enough to have 2 such birds so far this winter. 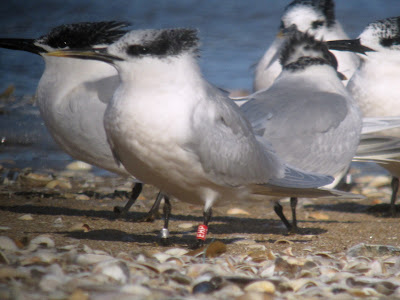 The first bird EHP was ringed on the Farne islands in 1996 as a chick and later recaptured on the Ythan Estuary in late July 2011 when it was given its individual colour ring. EHP was also the 3rd oldest sandwich tern we have caught with the oldest being ringed in 1986 in Northumberland.  Last winter EHP was sighted in southern England on 3 occasions between mid-September and late November. The next sighting and the photograph above came from across the channel in France at a site where over 50 Sandwich Terns were spending the winter. EHP was seen back in Portsmouth in early November ready to spend another winter in the English Channel. 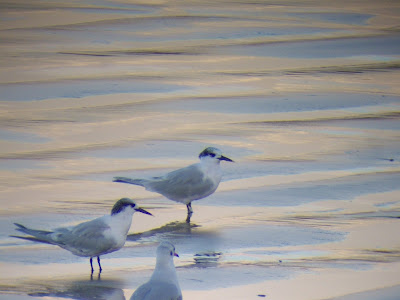 Another Northern wintering tern has recently been reported in Douarnenez, France on 3 occasions during this November and had been seen in the same area in late November 2010. Apparently a small flock of 5-15 sandwich terns regularly winter there now. Unlike the Farne Island’s bird we are unsure of where this bird was hatched as it was unringed when we caught it in 2010. We do however know that this bird breeds in North-east Scotland on the Ythan estuary where we have sighted the bird this summer in the colony alongside 50 other colour ringed sandwich terns. So while some of the Scottish breeders such as EAN below are sunning themselves at the end of an arduous migration to winter 9,000km away a few individuals are braving the winter only 1,000km away. 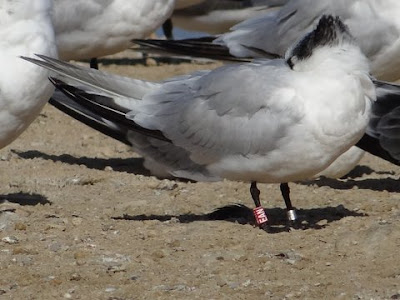 Thanks to Mark Boorman, Jenny Lennon, Jean Pierre Marie & Gilles Coulomb for the fantastic photos. Any sightings of Sandwich Terns with colour rings starting with the letter E should be sent to ewan_weston  "at"  hotmail.com
Ewan
Posted by Grampian Ringing Group at 21:27 No comments:

European shags have been intensively studied on the Isle of May since 1998 and the majority of breeding adults and offspring have been ringed with field-readable darvic rings. More recently shags have also been darvic ringed at other sites in the UK, including at the Bullers of Buchan! This project is linked with the Centre of Ecology and Hydrology (CEH) and Aberdeen University and is actively supported by the Grampian Ringing Group –  in the form of scaling cliffs to ring chicks and through people sending in their resightings. 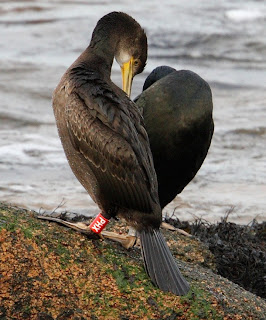 We have now been out getting winter resightings for 6 weeks and have managed to accumulate just under 4500 sightings of more than 1700 individuals!  Our main areas for resightings are in Aberdeenshire, Moray and  Fife. However, we also get resightings sent in from all over the east coast (from as far up as Thurso to a rather lost juvenile on a windowsill in Lowestoft...).

The main sites around Aberdeenshire include Scotstown Head and sites in Peterhead and around Fraserburgh, with the number of birds seen at each site varying a great deal depending on tides and weather conditions. Jane is currently holding the title for seeing the most darvics in one place – 115 at Scotstown- with Moray a close second with 97 darvics! 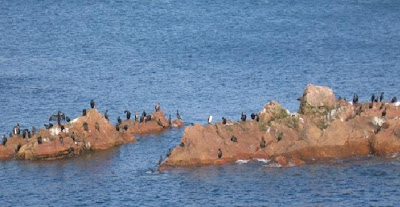 Shags and cormorants at Buchanhaven

In amongst the unringed birds there are always a surprising number of birds with darvics. The darvics come in yellow, red, blue, green and white, and on each ring there is a unique 3 letter code. The information that is linked with each bird is extensive and all of these resightings are helping us to understand where the birds go in the winter in relation to breeding colonies along the coast. Armed with all the resightings, we aim to answer a range of questions, including whether birds are faithful to a specific winter location over multiple years and if winter location effects a bird’s future survival and subsequent breeding success.

A highlight of the winter season so far has been seeing a juvenile bird at Scotstown that was ringed as a chick on Stroma, Caithness earlier this year (Red ring; code RDR)! 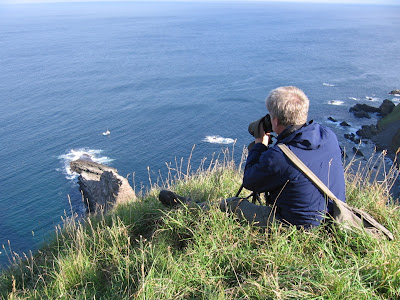 
Thanks to everyone to has sent in these valuable sightings, your contributions are greatly appreciated. There are still five months of winter shag spotting ahead of us! If you are interested in finding out more about the project or would like to send in a resighting, please email shags@ceh.ac.uk or contact me directly at jenny.sturgeon@abdn.ac.uk.

Posted by Grampian Ringing Group at 23:42 No comments:

The biggest Common Gull colonies in the UK are in North East Scotland, and this summer we started colour ringing the species for the first time, mostly at a large inland colony at Tillypronie (below). So far we've had 5 local sightings along the coast this autumn, giving us an interesting, albeit predictable look at chick dispersal. 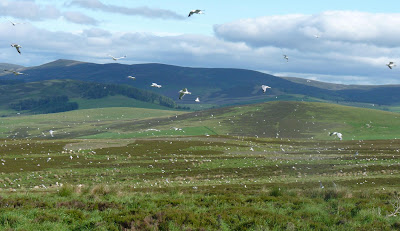 However, we've also had an extremely surprising sighting we definitely didn't see coming. A chick (2XKN) ringed at Tillypronie on 30th June was seen 983 miles away on 1st November, at Santa Cruz, La Coruña, Spain! A photo of the bird by Antonio Lopez Porto is below, complete with a Mediterranean Gull for proof of its location! 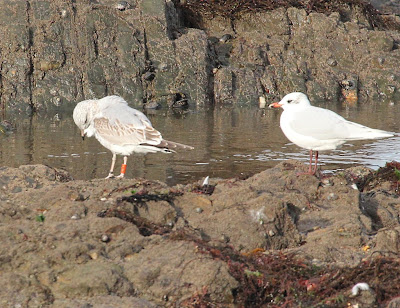 What makes this sighting so unusual is that it is the first Common Gull ringed in Scotland to ever be recorded in Spain, and only the second for the UK. The first record was from a chick ringed in 1957 in Kerry, Ireland, which was shot in Spain a few months later, amazingly only 7 miles away from where our bird was sighted!

UK ringed Common Gulls recorded in other southern European countries are very rare, with only 1 recovery in Portugal, and 1 in Italy. 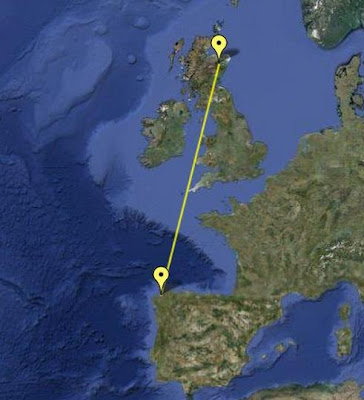 Hopefully continued colour ringing and sightings will help us discover more about the movements of Scottish Common Gulls. All our birds have orange rings with 2X followed by two letters. Please send any sightings to calumcambl@hotmail.co.uk.

Posted by Grampian Ringing Group at 22:31 No comments:

Waxwing on the way back to UK?


With waxwings beginning to arrive in the UK again we received a great piece of news from one of our Highland ringing neighbour’s, Brian Bates. Brian had been browsing some photos on a Bird Photographic website and after looking at several images taken by Elsa M. Wallumrod on 27th October at Horten, near Oslo, Vestfold in Norway he somehow managed to spot a colour-ringed bird, bottom left in the image taken by Elsa below. Does he scour these websites with a magnifying glass? 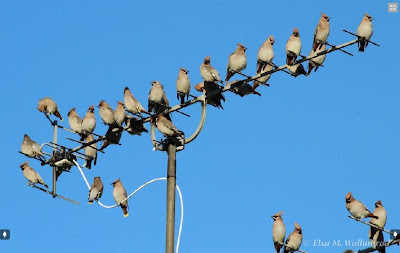 After requesting a zoomed in and higher resolution photo of the bird, Brian forwarded on this 2nd image from Elsa and it proved possible to individually identify the bird by its colour rings. 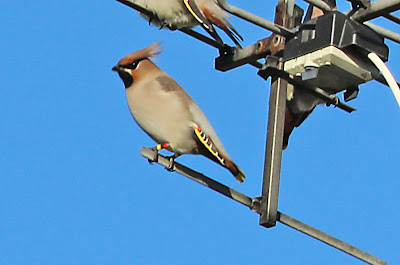 RNY had been ringed as a young male in Ballater, Royal Deeside (40km west of Aberdeen) on 30th October at the start of the large invasion of  2010. As a bonus it had a little bit of a history during that winter in the UK. It was photographed as a teenager hamming it up in a Montrose hedgerow by Harry Bickerstaff a couple of weeks after ringing (see below) then Tony Sweetland resighted it 3 months later in deepest England, in Bracknell. Who knows where it has been since until now?! 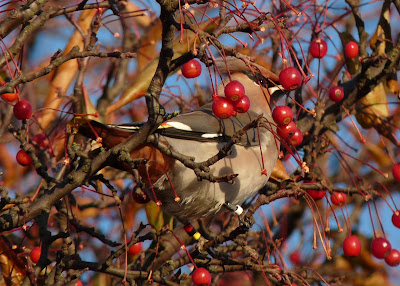 Thanks to 100s of observers throughout the UK and Ireland the waxwing colour-ringing has produced lots of resightings and a fascinating insight into their varied and unpredictable movements in search of berries throughout the country during invasions when we have been able to catch and ring reasonable numbers. See map of results from the invasion of 2010/11. 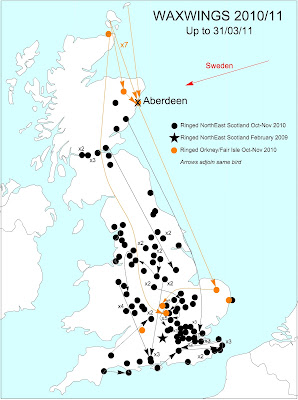 Once they depart from the UK in spring though it is a very different story. They seem to just vanish into the massive taiga forests of Scandinavia and Siberia never to be seen again and we receive very few reports. If we do receive any, they have more often than not been killed by cats (in Norway, Sweden, Finland and Russia). One extreme recovery (link below) shows a bird in Aberdeen one spring then killed by a cat the next in the USSR 3714km away, east of the Ural Mountains, on a parallel with Azerberjan and nearer to Mongolia than Aberdeen……amazing!

A very big thank you to Brian Bates (I’ll buy you a pint at the ringers conference in a few weeks Brian) for his microscopic web scanning, to Elsa Wallumrod for the great photographs, to Andrew Clarke, coordinator of the Photographic Website, for the photos and further information, to the GrampianRG ringing team at Ballater that day in 2010 (Ewan Weston, Alistair Clunas and Paul Baxter) (and to Neil Cook, Harry Scott and Mik Marquiss who weren’t there but provided valuable intelligence), to Harry Bickerstaff and Tony Sweetland for keeping tabs on this marauding teenager once he’d moved on and to all other GRG waxwing ringers and all the 100s of observers who have subsequently reported colour ringed birds, often with tremendous  accompanying photographs.

Posted by Grampian Ringing Group at 00:19 No comments: