Before you read this, and in case you don’t get further, please go and look at your local waxwings for colour rings, and photograph them in particular. I know- a real hardship, but we really do want to get as many resightings as possible, so even if it’s just a brief look, we would really appreciate it! Each bird has a metal over yellow plastic colour ring on the right leg and more importantly, three individual colour rings on the left leg identifying the individual. It’s worth noting that individual birds can splinter off from a group from day to day, so, (for example) just because thirty were sighted both today and the day before in your local area doesn’t mean that these are the same birds!

If you resight a waxwing with a colour ring – please send the location, date, ring colour combination (and photograph if you have it and are happy to share it with us!) to: grampianringing@gmail.com and/or rduncan393@outlook.com. 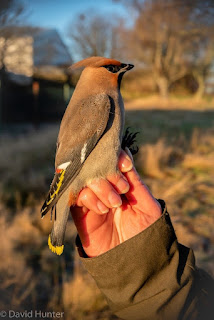 There are many ways to mark the coming of winter. The final leaves dropping from the trees, the first frost that doesn’t lift all day, or the September rush on Christmas chocolates in the shops. But here at Grampian Ringing Group it really isn’t winter until the first group of waxwings arrive in Aberdeen.

The soft chirruping of these birds marks the start of a new season of deep Scottish winter, when you have six hours of daylight to scramble and try to find the birds – let alone ring them. In our own Raymond Duncan’s words, waxwings are ‘spooky’ and by that we don’t mean that they’re terrifying. Rather that they will scattily move from tree to tree across the city, sometimes without warning, disappearing into the cool air - much to the sighs of despair of those of us out in negative temperatures trying to set nets.

In order to successfully ring waxwings, you first need plenty of birds. That might sound obvious, but the number of waxwings in the city makes a real difference between how likely we will be to catch and how many cold mornings are going to be spent waiting by empty nets. A hundred, two hundred birds are pretty slim pickings across the whole of Aberdeen, especially in years with high berry crops. This seems to be because the birds split into smaller groups to feed across the city; as and when they feel like rather than staying together as a single entity. The bigger the flock, the better chance you have of both the birds coming back to strip a tree, and of catching. Higher berry crops mean that not only do they split off more readily, but that there are that many more places to check as well. Many a morning has been spent driving across the city searching for birds that were sighted less than an hour ago, but have since disappeared into thin air.

This year has been a particularly good berry crop across all of the rowan trees in the city, and we’ve had a reasonable number of waxwings arrive. At its maximum point, we’ve had around four to six hundred in the city (sadly never in one flock) – certainly a number we’ve been able to work with. For those of you reading who aren’t familiar with the project, GRG has been colour ringing waxwings for over thirty years, and have had thousands of resightings over that period to map their transit as an eruptive migrant.

The first weekend of November is usually the best indicator of how many birds we’re going to get in a season, with a good number being sighted in that first week indicating a good start, or a lack of birds a possible no-show or poor year. This year there were as few as fifty birds being seen in the first ten days of November, followed by a decent influx of birds in the fourth week of November and early December, which was when our best days so far this season have been.

Not including the several days of attempted catches without success, we had our first catch on 23 November, once the numbers of birds had sufficiently increased to a level that made it possible. At the time of writing we have precisely one hundred waxwings colour ringed and out into the world, and have had eight resightings as far south as Northumberland.

The delicate art of ringing waxwings
Waxwings tend to eat off of rowan trees with the small, red/orange rowan berries first, before moving on to the ornamental yellow/white and lastly the pink berries. They’ll also have a picking at other large red berried rowan, hawthorn and whitebeam trees. This seems to be the general order of preference if you are a waxwing. This year has been no exception, with the birds following this order nicely, apart from there being so many berries that they haven’t been able to finish one group before either seemingly without reason swapping to the next variety or the berries of one group have started rotting on the tree. The ornamental rowans tend to rot later than the more natural types, so it makes sense that they at least would use that in determining preference. Our most success this year has been on yellow berries, with one low lying tree in particular next to a busy intersection in an industrial estate allowing us to catch over thirty birds over several days – despite the traffic putting the birds off at less than opportune moments!

When we are out catching and ringing waxwings we often get people coming and asking us what we're doing, which can be a great opportunity to both show local people what we are doing and get them interested in the birds and project. Many local photographers who had come out to snap the birds are really engaged with what we are doing, and seem delighted to see the birds up close as well as lern more about what we are doing. We have a network of waxwing spotters across Aberdeen whome we know from years of studying waxwings and are now kind enough to let us know when birds start to use their sites; it feels great to engage the local community in this way. 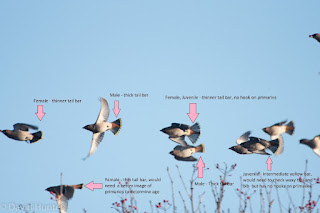 Waxwings are one of the most straight forward passerine species to age at this time of year, with first year and adult birds being very straightforward to tell apart. As seen below, it all comes down to the ‘hook’ on the primaries. Juvenile birds lack this, and only have the downwards bar on the leading edge. This can easily be seen in the field, and it can be really satisfying and useful to see whether a flock is mainly adults or juveniles. There is a very high proportion of adults this winter.

Sexing can be a little more difficult, but is still possible in the field. Waxwings get their name from the ‘waxy tips’ on their secondaries, small red extrusions from the rachis (central spine) of a feather out of the end of the feather. Males tend to have a higher number of these (up to all eight secondaries) and will tend to be both wider and longer than those on females. There are also particularly obvious females lacking any waxy tips, known sometimes as ‘waxless’ wings or just ‘wings’, to much amusement whilst ringing. Some particularly flashy males will also have waxy tips in the tail, and is a mark that is really impressive in the hand! There is an overlap in both the length of and number of waxy tips in a birds wing to determine whether it’s male or female, and the length of yellow in the tail should also be used to determine this with males having broader bands. The bib can also be looked at if there is still doubt after these two criteria, with males having a more distinct line separating the body plumage, with females’ bibs diffusing more subtly. And just to round off their ridiculously beautiful plumage, check out the under tail coverts! 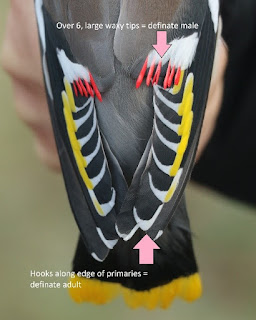 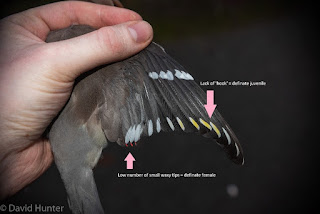 As part of the study we measure: the number of waxy tips, length of longest waxy tip, and length of yellow band on both the first and fifth tail feathers on all birds ringed. Interestingly we have caught mainly adults so far this year, and two juveniles have had particularly short wing length (~10mm shorter than they should be) and no, we haven’t just had trainees measure them. It’s impossible to know but because of this we wonder if the waxies had a poor breeding season this year, and therefore there are less young on migration, or if it’s just random chance. Nonetheless, it’s been interesting to note.

How you can help!
Now that we’ve unleashed a flock of one hundred colour ringed birds into the country, we need your help to resight them. We've started to get resightings across the northern UK already, showing our birds are already splintering off south. What we need is for a continuous look at the waxwings in your local area to look for rings. With the advent of modern photography, we get some fantastic records of our birds back and if birds hang around in your area we would appreciate you checking them again for rings as they might have been joined by new birds from the north and it helps us build a picture of their movements this invasion.

As it is, we think that with such a high number of berries many birds might stay with us up north all winter, and we’ll be out checking, but as there have been a good number going south already, it will be interesting to see if that rings true!

Thanks for reading, and happy waxwing hunting!

If you resight a waxwing with a colour ring – please send the location, ring colour combination (and photograph with rings visible if you have it and are happy to share) to: grampianringing@gmail.com and/or rduncan393@outlook.com. 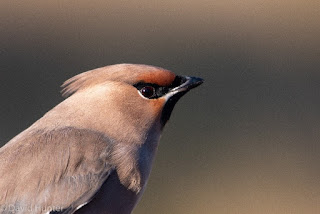 Posted by Grampian Ringing Group at 21:08