This was surprise one morning and stretched my skills in reading neck collar rings to their max!

This mute swan first appeared on Cotehill, Aberdeenshire on 9 October 2017 and was also seen the following day.  It was originally ringed as a juvenile female one year, two months and three days previously on 7 August 2016 in Zuidhorn, Zuiderdijk in the Netherlands.  A total distance of 699.2 km away.

However, following contact with the Dutch ringers it transpired that following ringing it stayed in the Groningen region of the Netherlands until at least 14 April 2017 before being seen at Loch of Strathbeg on 20 June 2017.  There was also a later report of a neck collared mute swan on Meikle Loch the day before it appeared on Cotehill but was too far the observer to read it, presumably it was this bird.

Phil B
Posted by Grampian Ringing Group at 12:03 2 comments:

New eider project on the Ythan

The University of Aberdeen, Grampian Ringing Group and Scottish National Heritage are collaborating to try and understand the large decline of the eider population (-70% since 1991) around the Ythan Estuary and Forvie NNR, Aberdeenshire.


After several decades of pause, the colour ringing of common eiders has now resumed with over 90 birds ringed in spring 2017 (and more to come). Combined with other data, we expect ring sightings will help elucidate the mechanisms of population change. In particular, large numbers of resightings of females all around the year are a key priority and individual birdwatchers’ contribution could make a difference. The eider have been ringed on their left legs with green colour rings with 2 white letters on.

Observers of ringed eiders are welcome to report their observations online using one of these two ways:


1)      For occasional records, you may directly use the registration-free online form here: https://goo.gl/forms/k0TYtngZ7ropCIIs2 (slower data entry, no photo upload or location acquisition)


2)      For regular observers or those with multiple records to submit, we strongly recommend using the much faster Epicollect5 app (on iPhone and Android) or website https://five.epicollect.net/ (registration required at first to be able to access the eider project). The form allows you to enter resighting data rapidly from your computer, tablet or smartphone, either online or offline in the field (with the app installed on your smartphone), to upload photos of the bird/rings, and to acquire the record location directly from your device. The data are stored on the device and can be uploaded to the project database once back online. To get registered as a user, please send an email to grg.ringing.eidersNoRobotgmail.com (replace NoRobot by @), providing your name and the email address of your Google account (a Google account can be set up with any email address). Registration is manual and may take a day or two.


To our knowledge, the current record is 27 individuals resighted in half a day on the Ythan and the first sighting from outside the area is eagerly awaited!


Many thanks in advance for your help,

Group members Ann and Walter Burns had a wee trip up north on the 7th June, 2017, including a visit to St. John’s Pool in Caithness.. http://www.stjohnspool-birds.co.uk/
Whilst there they managed to photograph 3 colour-ringed Sandwich Terns nesting on a purpose built island.

All 3 had been colour-ringed at the Ythan/Sands of Forvie.

WHITE EBT
Ringed as a juvenile on the Ythan on 16/8/10.
Had a Mediterranean holiday in Italy in late summer 2013.
Seen in the colony on Coquet Island, Northumberland in June 2014.
Seen at Lossiemouth in April 2016 before turning up at St John’s Pool 3 days later.

Light green/red
Ringed as a chick at Forvie in 2008.

The Sandwich tern colony at Forvie has enjoyed considerable success in recent years thanks to the efforts of the SNH full time and weekend staff who are kept busy with the public and maintain a protective electric fence around the colony to keep out ground predators. This year a whopping 950 pairs have settled down to breed.

Ringing has been carried out for more than 50 years at the colony. This allows us to monitor survival, recruitment, fidelity and the causes of any fluctuations within the colony. In this instance it also lets us know that with the colony thriving this is allowing the population to increase and expand, helping to establish new colonies such as the one at St. John’s Pool as identified by the colour-ringed birds from Forvie.
Posted by Grampian Ringing Group at 15:02 3 comments:

After a tip-off from Maureen and Gordon Berry that a ringed Dipper had appeared on the Cowie River in Stonehaven, myself and Sam decided to try to retrap the bird and see where it had come from. Dippers aren’t generally known for long-distance movements, and with no birds having been caught there for several years, it was an interesting sighting.
We met up with Gordon and got a net set up near the river mouth, with a Dipper keeping an eye on us all the time. Sadly, the only thing we caught in 3 hours of waiting in the rain there was an over-excited dog - so after repairing a broken shelf string, we decided to try somewhere else!

We moved upstream about a kilometre, to a wide, fairly shallow, rocky area that looked like Dipper heaven. It was some way from where Gordon had photographed the ringed bird, but we were hopeful it would be around there somewhere. After resetting a net here (with the rain still falling), we didn’t have to wait long before we caught our first Dipper - a fine 1st winter female, but not the ringed individual we were after. Then came another, this time an adult male, but unringed as well.

Third time lucky - the ringed bird, an adult female. A quick text to Raymond with the ring number and we got her details - ringed as a chick at Cullerlie, around 20km inland from here, back in the spring of 2011. A good movement for a Dipper, and at 5+ years old, a good age too, with the oldest recorded in Britain at 8+ years old.

Soon after this we caught a fourth bird - a young male. There’s a good chance that these four birds constitute 2 pairs using the river.

A successful day in the end, with 3 new birds ringed and an excellent recovery - worth getting a soaking for. A big thank you to Maureen and Gordon for the tip-off, and sorry we didn’t catch while you were with us!

Waxwings on the move - thankyou for all your sightings

What a difference a few weeks can make in the life of the Waxwings! Since previous update on 6 January.

Five in Ireland, a record number for our studies and at least one on the Isle of Man (which then diverted to Wales rather than carry on over to Ireland).

A build up in middle England, including GB who didn’t like the east coast.

Movements down the east side with noteable build ups in Tayside and Fife, Eastern Scotland; NE England with birds in Newcastle (3), Hull and Durham and around London into Kent and our furthest bird south so far in Crawley, West Sussex.

And we still have quite a lot in and around Aberdeen.
Maps below show the changes since 06/01 and an interesting comparison with the same time in 2010/11 when cold weather suddenly increased berry competition and lots fled rapidly south, not lingering in Scotland………..with a build up along the south coast.


A huge thank you to everybody for their sightings and photographs so far. Each contributes greatly to the overall picture of what the Waxwings are getting up to across the country. All are greatly appreciated. Keep up the good work. A free plug on Winterwatch didn’t do any harm either!

We can only show a wee selection of your great photos here. Thank you very much.

It’s turning out to be a tremendous winter for Waxwings (hopefully) throughout the UK. In and around Aberdeen we are getting the best of both sides we think. It’s early January and we still have 100s here whilst, thanks to so many birders, photographers and observers around the country our colour ringing project is helping us keep tabs on the movements and fortunes of many of those birds which have chosen to move on.

THE GOERS
The map below shows the distribution of colour-ring sightings (up to 06/01/2017) of birds ringed in Aberdeen and shire during November and December 2016. 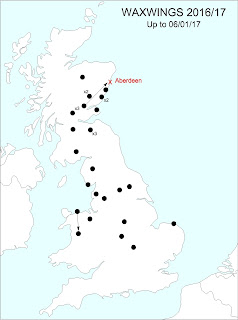 Just some of the great photographs being sent through:

Waxwing YLO, ringed as a young male in Aberdeen on 27/11/16, was photographed by Neil Alderson and Yvonne Williams in the B&Q car park in Llandudno, north Wales on 30/11/16 then 5 days later by Emyr Evans 82km south in Machynlleth in mid Wales.

Sadly not all reports/photographs have been of happy berry eating birds. Below is Waxwing BLO found dead after striking a window in St Andrews in Fife.

Windows and Perspex bus shelters are a very real and fatal hazard to Waxwings. Despite our best efforts around Aberdeen we have still had over 20 birds reported dead in the city due to striking windows.

THE STAYERS
Meanwhile other birds colour-ringed at the same time as some of the movers above are still being recorded in Aberdeen. Having almost completely finished the rowan berries (apart from a couple of trees still being guarded by reeeeeally hard Mistle Thrushes) they have now moved onto Tree Cotoneaster, a species so abundant around town this should keep birds with us until May.

THE WANDERERS
Some of the birds don’t seem to have decided if they are going or staying though. Once the flocks had finished the berries in rural towns such as Inverurie and Ballater (22km NW and 58km W of Aberdeen) colour-ringing has shown that some birds moved away south whilst others moved into the city where berries were still plentiful. One decided to be different and headed 77km W over the hills into Speyside while a bird ringed in Aberdeen City Centre on 28/12/16 decided to head 35 km W back out into the countryside to Aboyne where it was photographed on 05/01/17.

So a very big thank you to all you folks (too numerous to thank individually here) who have kindly taken the time and trouble to report a colour-ringed Waxwing to us. Each sighting contributes greatly in helping us to follow the movements and fortunes of these truly awesome Scandinavian invaders. If you do see a colour ringed waxwing then let us know: grampianringing@gmail.com.


(on behalf of Grampian Ringing Group)