Last year GRG achieved our highest ever ringing total for redpoll, with 3837 lesser and 19 common redpoll ringed. Most were caught in spruce plantations in October and early November. There were exceptionally large flocks present in the region, demonstrated by over 1500 being ringed at the same site over the course of four days.
We were hoping for a repeat of that this autumn, and at first it looked promising. 106 redpoll were ringed on 3rd August, which was a great total for that time of year, and we continued to have reasonable numbers into September. But by mid-October, the time we normally start to have our largest catches, there was barely any to be found! Sites where last year flocks numbered in the thousands were completely devoid of redpolls.
The mystery of where they’d gone was quickly answered, with ringers in southern England reporting they were experiencing record catches of the species. This was further confirmed by a slew of controls, 19 of which were recaptures by English ringers, and one which impressively had its ring read in the field on Helgoland, Germany.

The map below shows the location of the birds we’ve had controlled over the past couple of months. We've not had any reported this week, but that may be due to the persistent winds we’ve been having making conditions for ringing unsuitable! Based on the concentration on the south east coast it looks like many of the redpolls may not spend the winter in the UK, and we are expecting recaptures to be reported from the continent soon. 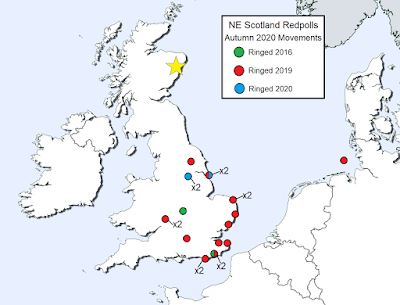 What caused the redpolls to clear out of NE Scotland is unclear. The spruce crop was poor compared to last autumn, yet there was plenty of birch for them to feed on as they’ve done in the previous years. Hopefully when the winds die down ringers down south can get out in field again, and we can understand more about their movements this winter.
Euan Ferguson
Posted by Grampian Ringing Group at 21:38 7 comments: