The North Sea population of Sandwich Terns is highly mobile after breeding with birds remaining in the vicinity for several months post-breeding. It has long been known and indeed our ringing has also shown that Sandwich terns from other parts of the North Sea Population arrive on our coats in late autumn prior to migrating south for the winter. Although this is a phenomena we know occurs it is still poorly understood. Hopefully some of the efforts we and Dutch researchers are undertaking will shed some light but for now little or no information exists on the inter-annual movements of individuals. As the study is no reaching its 3rd year we are now starting to gather some intriguing evidence. Today I received several sightings from a local researcher that had spotted 8 colour ringed sandwich terns while reading shag colour rings on the local coastline. One of the birds was a real gem of a sighting having first been caught and colour ringed in late August 2010 and subsequently located breeding in the Netherlands in both 2012 and 2013 (see photo). That information alone is interesting but in 2012 I observed it in early September again in north-east Scotland. So we know that this individual that breeds in the Netherlands has returned in late autumn to the same stretch of coast in Scotland at least 3 of the last 4 years prior to migrating south. Fantastic information that we would never have been able to get without the use of colour rings and the dedication of international observers! Hopefully with further ringers using colour rings in the UK and a lot more sightings we can shed some light on this fascinating behaviour. 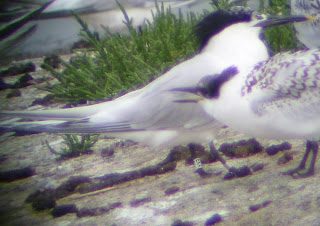 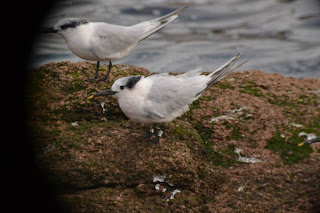 EKA on a pre-migration trip up to Peterhead (Jenny Sturgeon)

Posted by Grampian Ringing Group at 23:45 No comments: