Last Gulls of the Summer 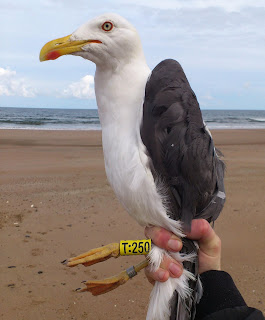 We've reached the end of summer and the end of our gull darvics. The 250th was put on a Lesser Black-backed Gull today, after a whoosh net catch on Aberdeen beach. Time to order some new rings!

Most of the birds ringed over the summer have been Herring Gulls, but seven Lesser Black-backed Gull, two Greater Black-backed Gulls and a Glaucous Gull have also been colour ringed. The Glaucous is the first to be ringed in the UK since 2002, with only 60 birds having ever been ringed. 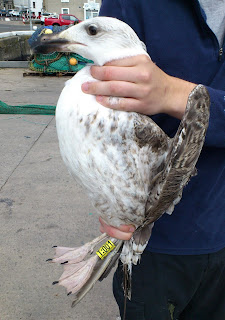 The first Greater Black-backed Gull (above) we colour ringed this year at Fraserburgh was seen 45 miles away at Lossiemouth 4 days later. Having only ringed two Greaters so far that's a good resighting rate! We intend to catch more this autumn at the harbours up north. 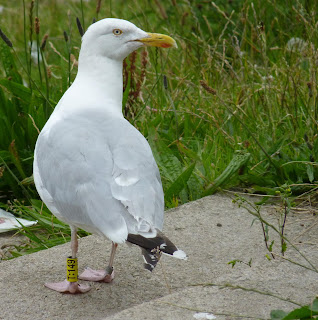 Several birds we caught had already been metal ringed. The oldest was ringed as a chick at Aberdeen harbour in 1997. Many gulls are now being resighted around the city. The photo below shows two juveniles we'd ringed at different sites standing right next to each other. Amazingly we'd only ringed three juveniles at that stage! From our resightings we are seeing that breeding birds don't necessarily feed near the nest site, with birds ringed in our gardens in the suburbs seen on rooftops 8 miles away in the city centre. Hopefully more resightings will help us understand more about the movements and population of Aberdeens gulls. 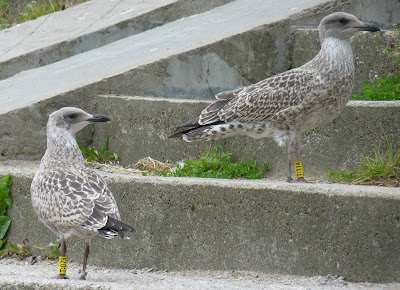 Please check all gulls you see for colour rings.

Euan
Posted by Grampian Ringing Group at 17:50 No comments: