BTO CES Session 9 (31 July 2016) began the same as the previous 8: 0330 hrs alarm, met at 0445 hrs, walked in, set nets and assembled ringing station.  In between the frequent short rain showers, Raymond, Lindsay, Hal and I carried out regular checks of the nets extracting any birds.

Little did we know what excitement lay ahead?  As Hal and I approached Net No. 3 we spotted 2 birds, the nearest one was clearly a Song Thrush but the second bird struck us as being a very strange colour.  On closer inspection it was obviously another Song Thrush but the colour was one that Hal and I had never seen before.  We returned to the ringing station with our find eager to show Raymond.  On seeing the bird, Raymond, in all his many years of ringing, hadn’t seen anything like it since Innes left for Edinburgh 20 years ago.  After all the bios were completed on both birds I took a series of photos before the birds were released. 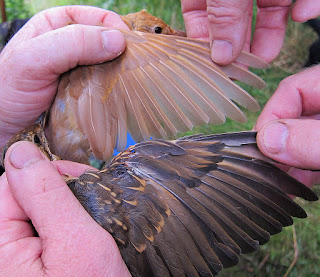 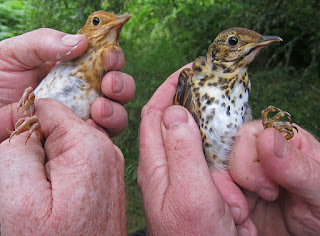 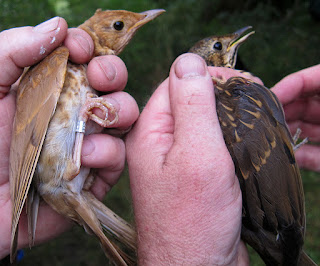 The wise group of ringers concluded it was a strange kind of leucistic plumage which they christened Gingerism. However, in later consultation with an even wiser ringer (and former Biology teacher) Ally Duncan (of Oystercatcher ilk) we were reliably informed that this was called “Erythristic” – an unusual red pigmentation of the feathers.

Erythrism is a genetic mutation which causes an absence of normal pigment or excessive production of others.  In some mammal species diet can cause a similar reaction.  After researching the Internet it is clear that there is very little information available.  It would appear that this colour phase is much rarer than albinism and leucistic birds.