Following various blog reports during the autumn/winter about high Siskin numbers being ringed in England we’ve been lucky enough to “find” an amazing site at Durris near Aberdeen to help keep the picture of movements through the country going into the summer.

Thanks very much to Edith Beveridge for mentioning in passing she had counted 73 Siskins on a friend’s feeders one winter . I’m not sure if she was allowed to even finish the sentence before being interrupted to ask where, when and would her friends maybe like to see some bird ringing done in their garden!

Edith’s friends Lesley and Colin Blackhall were only too pleased to have us out to ring their Siskins and here we are 2 months and 1292 Siskins later now enjoying playing England shires and counties as details of some of the 27 birds ringed elsewhere start to filter through from BTO HQ.
See map for movements so far. 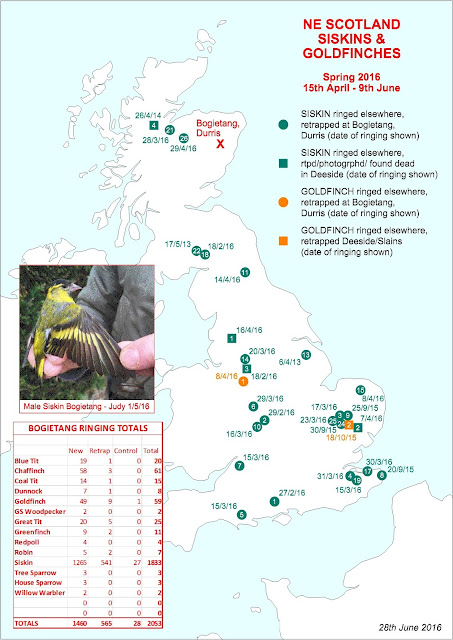 We thought we’d peaked at a session with 306 birds caught on 7th May followed by a spell of fine weather and “only” 37 caught on 14th May but emails from Lesley the following week saying numbers were back up again encouraged another visit on 22nd May. A gentle 10 whoosh net and 9 mist net catches and 6 and a half hours later and we stood at 403 birds caught. A check of the feeders before leaving suggested we’d only caught half the Siskins present. Incredible!
Unfortunately with everybody busy trying to keep up with the breeding season we have had to lay off the Siskins for a bit but we can’t wait to get back in the “autumn”. This years’ Juveniles are already beginning to swell numbers again!

Many thanks to Lesley and Colin Blackhall for very kindly allowing us into their Siskin City to have such an amazing time ringing the birds in their garden. We look forward to sharing ring exchanges up and down the country in the coming months to continue monitoring the winter/summer/winter movements of this awesome wee finch.

PS Lesley tells us she has been feeding the birds and getting loads of Siskins for years!!
Posted by Grampian Ringing Group at 11:29 1 comment: