Since 1993, Grampian Ringing Group has ringed over 160 young Ospreys in tree nests, fitting coloured darvic rings supplied by Roy Dennis as part of the Scottish scheme. At least 11 of these have been recovered or resighted abroad, in Spain, Portugal, Senegal, The Gambia, Guinea-Bissau and Ghana. Increasingly, resightings are coming from birdwatchers using digital cameras.

One such bird was a single youngster, ringed near Monymusk in Aberdeenshire on 17 July near Aberdeen, Scotland.  It was raised in a nest in a forest plantation – one that has been there for many years and has fledged many young. 2012 had very bad weather during the summer and many Ospreys found it hard to rear chicks. It was very pleasing that the birds were successful! Usually, we try to ring young Ospreys at a good large size, but sometimes they have to be ringed at a younger age. This chick was a late, small bird, lagging distinctly behind other nests in the area.


Once the birds have left the nests, often they are not seen again and their fate remains unknown. However, we received news a few days ago that this young bird - ringed on the left leg with a blue ring with the white digits 89, had been present at the Urdaibai estuary near Bilbao in northern Spain from March 15th to 8th April. It had been photographed and the ring read.

﻿
﻿
We don't know where else the bird has been, nor whether it is likely to return to Scotland this year, as many young birds don't come back in their first year, but it is always nice to receive reports and photographs, and doubly so as it shows that late, small chicks can successfully fledge, migrate and survive the winter.

Posted by Grampian Ringing Group at 23:35 No comments:

Many people ask when do the Waxwings leave.

The graphs below of numbers on fruit in gardens in Aberdeen in previous invasions gives some idea. 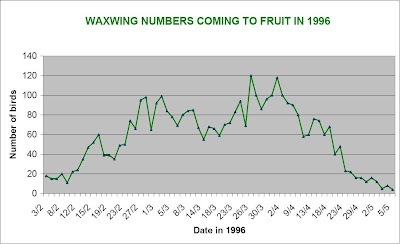 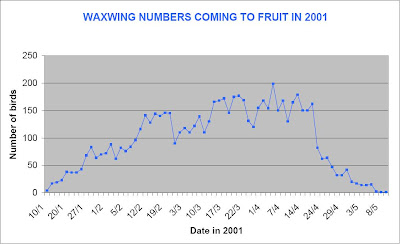 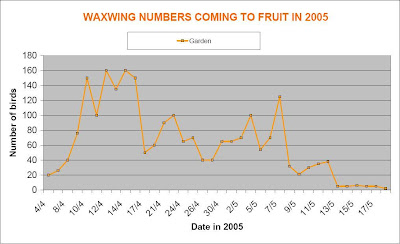 Timings differ between invasions but it’s not uncommon to have a large number (100+) during April when they start to fatten up and depart.

Double figures remain into May. The sudden increase and decrease in early May 2005 was accompanied by a bird caught which had been ringed earlier in the winter in Bristol, suggesting a surge of birds heading back north. However this appears to be very unusual. The number of birds returning back north is very, very small in comparison to the number which pass through earlier in the winter. Of probably over 1,000 colour-ring sightings in England, Wales and Ireland over the years none of these birds have been recorded back with us in NE Scotland on return spring migration. Most appear to depart from where they have settled earlier in the winter. 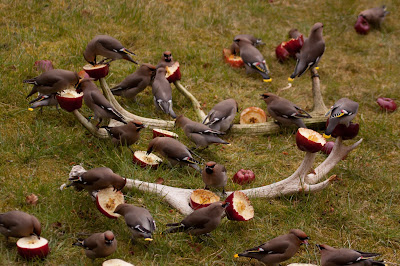 Finally thank you very much to Wendy Anderson for sending us a photograph of one of our colour-ringed birds from Aberdeen feeding in her garden in Culloden, near Inverness, 128km NW of Aberdeen. Their Waxwing “Scottish bird table” gave us all a richt guid chuckle. The colour-ringed bird can be seen top left. Hugh Insley and co. made a fine catch the following day, catching all 38 in a oner with a whoosh net.

Posted by Grampian Ringing Group at 22:49 No comments: