It has been some time since any significant numbers of pink-footed geese have been ringed in the UK, with the group's last catch being 20 birds at the Loch of Skene in 2008. However when we heard colleagues at the WWT had 2 GPS neck collars to fit on 2 pink-footed geese, we were keen to help out. With a stalwart group baiting and checking a site on the outskirts of Aberdeen with a mixture of tatties, carrots and grain a small catch looked imminent.

After weeks of dedication all things aligned and we were set to take a small cannon net catch of pink-footed geese. With the birds finally on the bait around lunch time, 30 were in the area and I gave Carl Mitchell from the WWT the "3.2.1. Fire" command  only to be met by "hold on a minute I need to just charge the firing box up first". Luck was on our side and as the box charged up, so did the geese. With the box charged we took a catch, with the net flying beautifully and catching an incredible 91 pink-footed geese - our second largest ever catch.
With a good team of 12 we were able to quickly extract and process all birds, fitting each with a neck collar containing a unique 3 letter combination for reading in the field. Two special birds were fitted with incredibly light weight GPS neck collars to track their movements as part of a pilot project to gather information about feeding and roost site use in the UK.

So far the birds have remained fairly local. We will bring you updates on their movements later in the winter and hopefully when they have safely arrived back in Iceland. 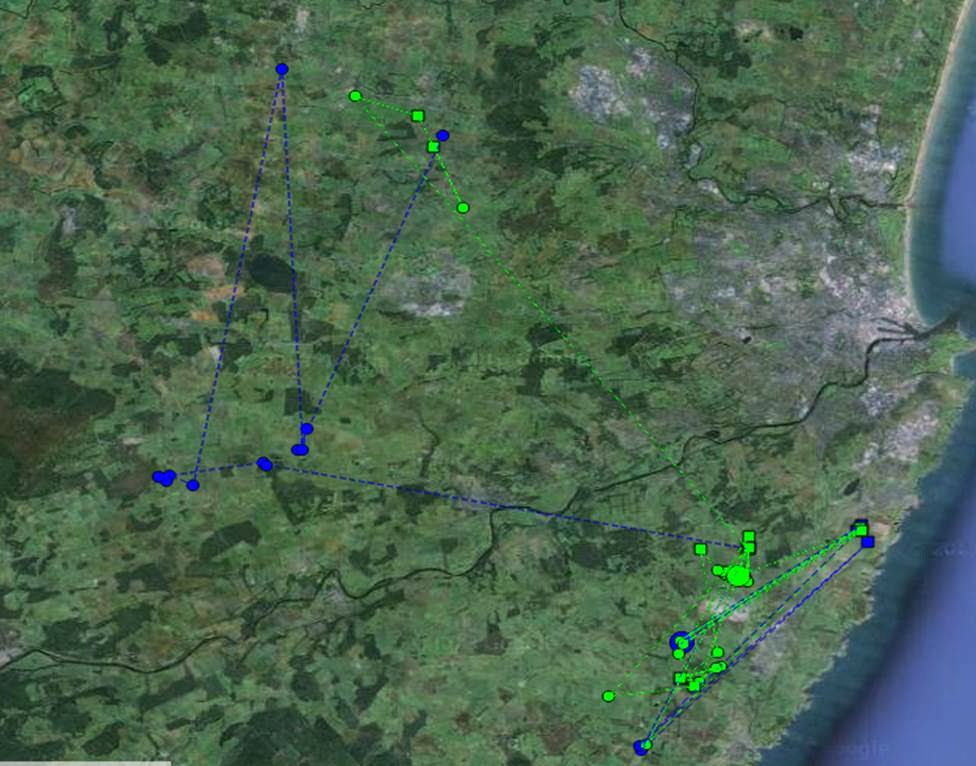 Posted by Grampian Ringing Group at 11:13 No comments:

The food rich mud and the safety of sandbanks on the Ythan Estuary near Newburgh provide resident birds with a perfect larder and resting area. This location is also attractive to migrating birds as they pass on their journey south. Other visitors arrive as part of their post breeding dispersal. Among the tourists to the Ythan during the autumn of 2013 have been a number of colour-ringed and “darviced” birds. 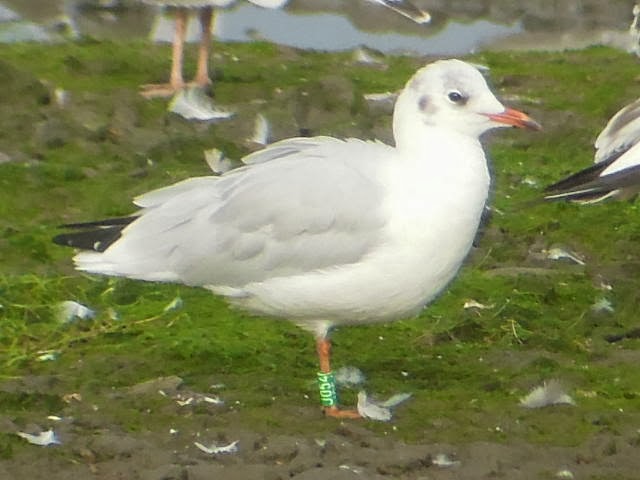 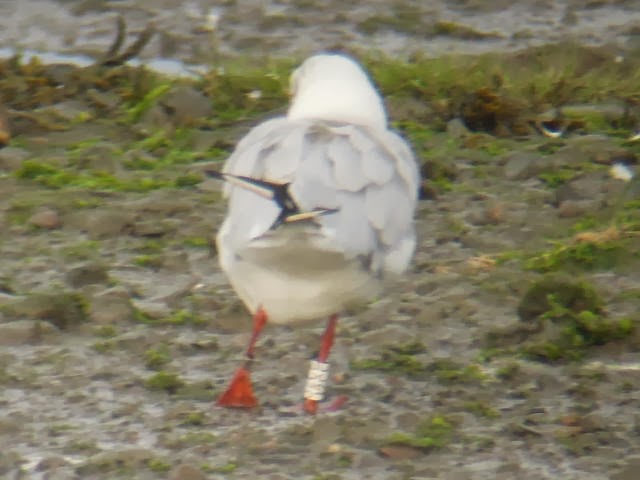 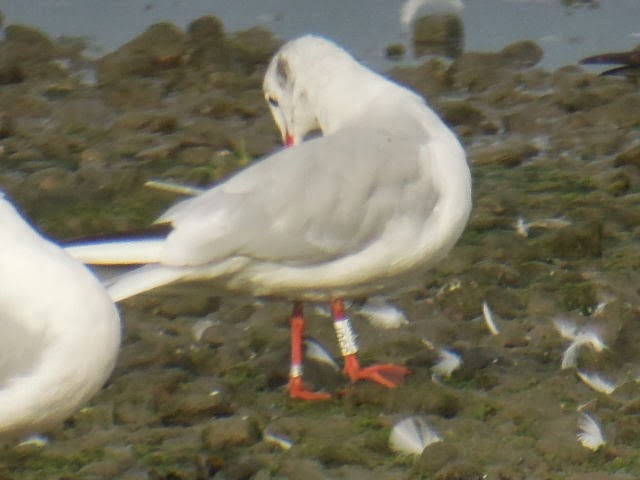 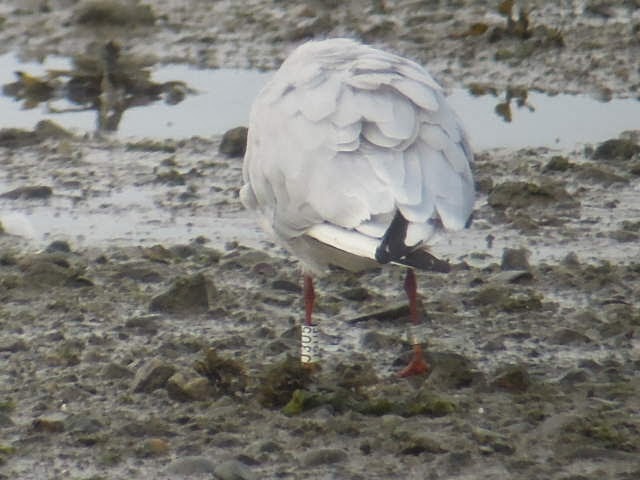 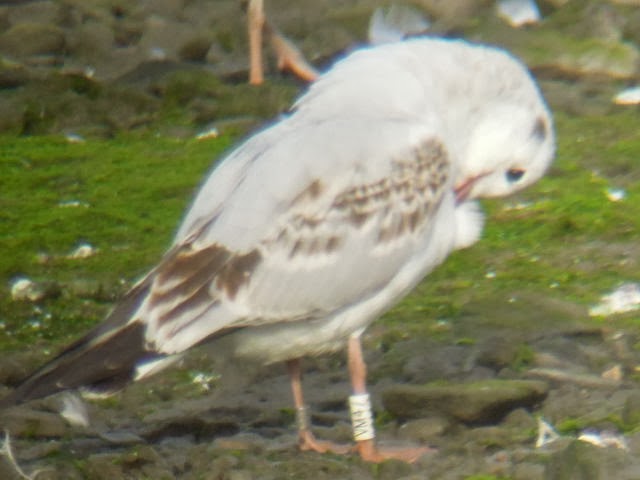 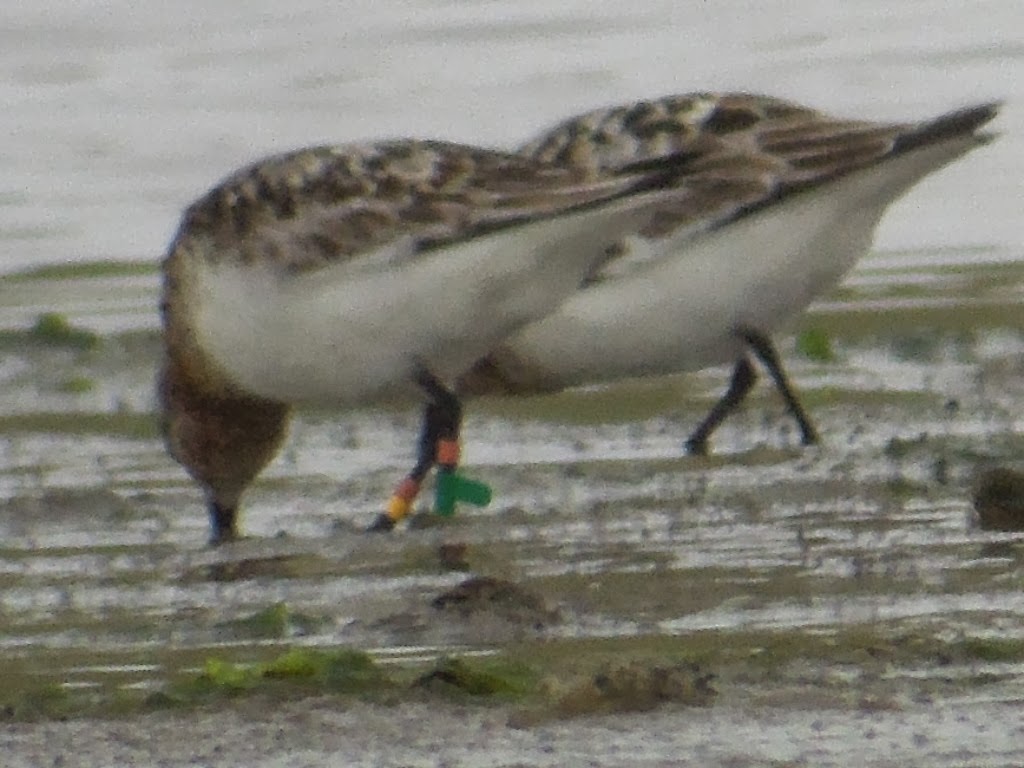 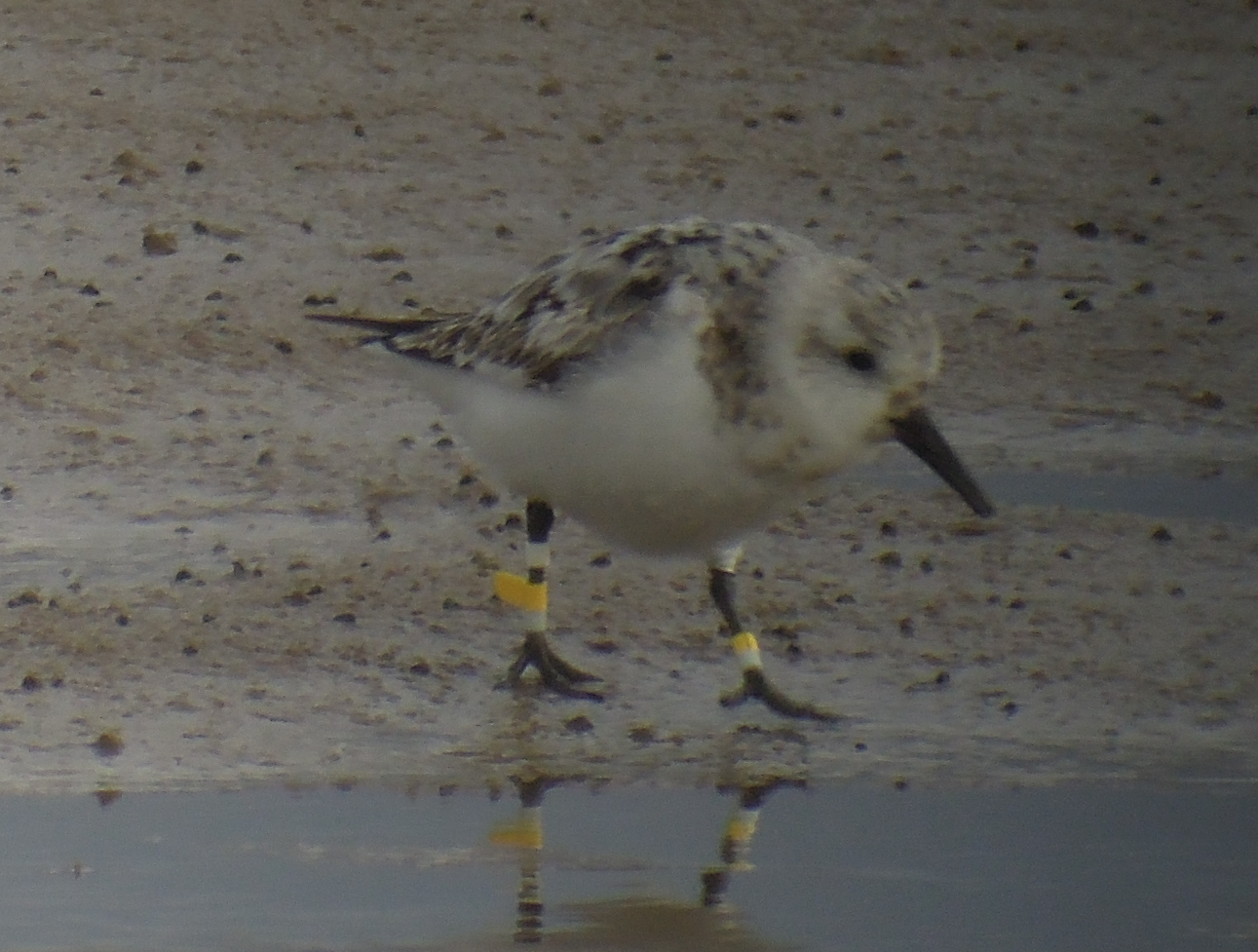 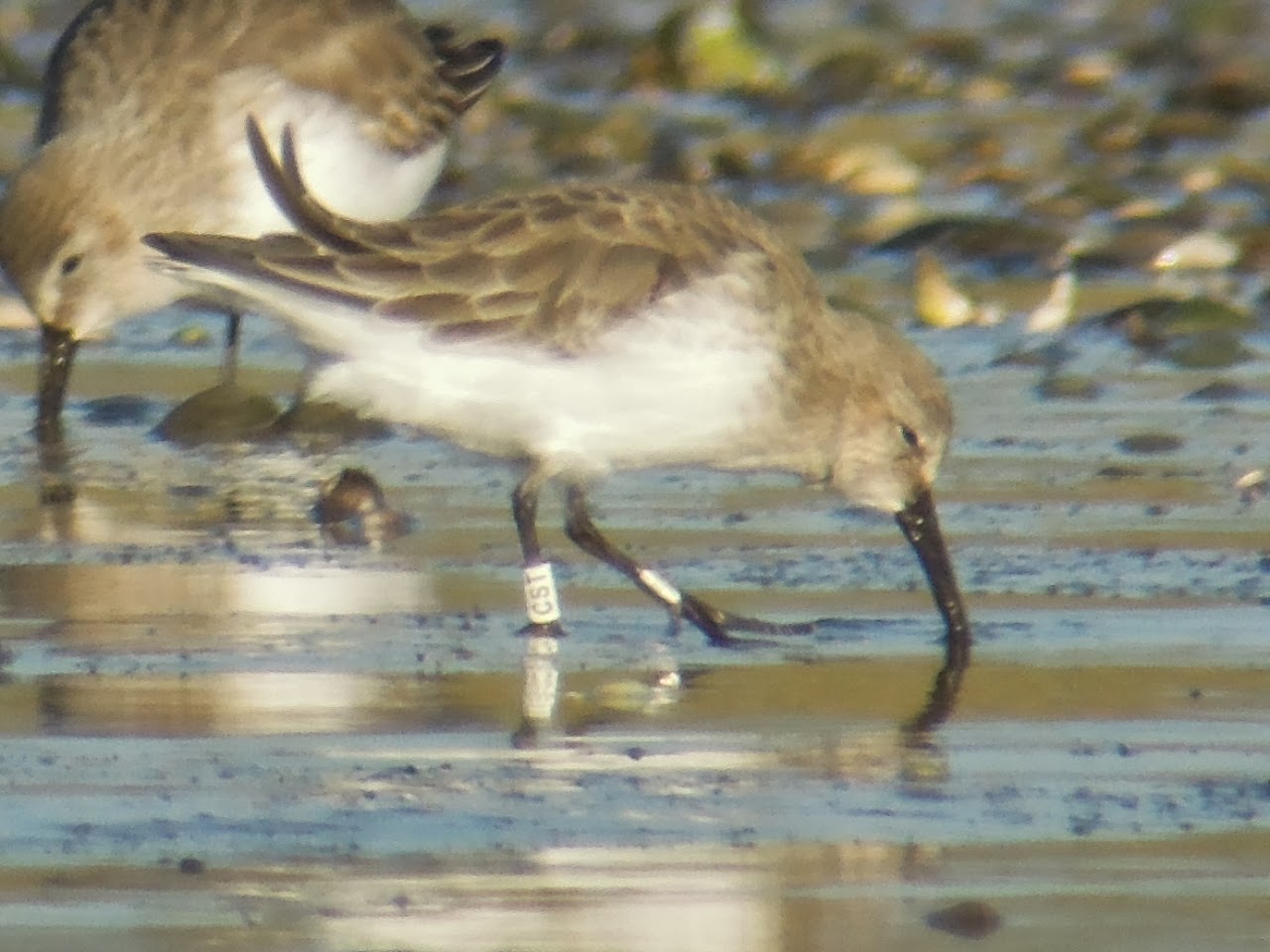 The maps below illustrate the above bird movements to the Ythan. 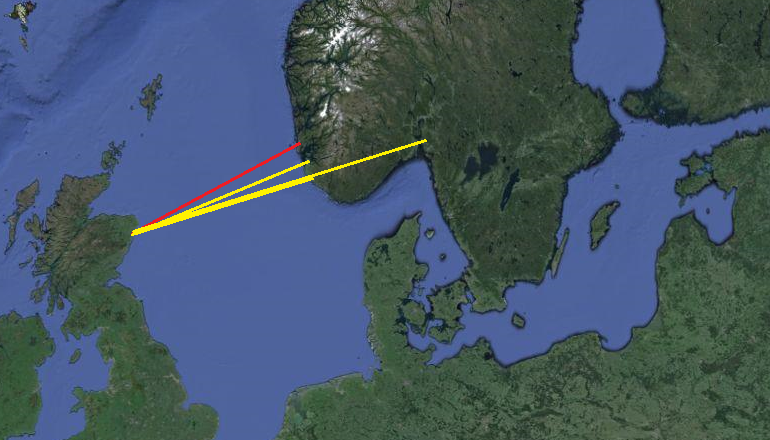 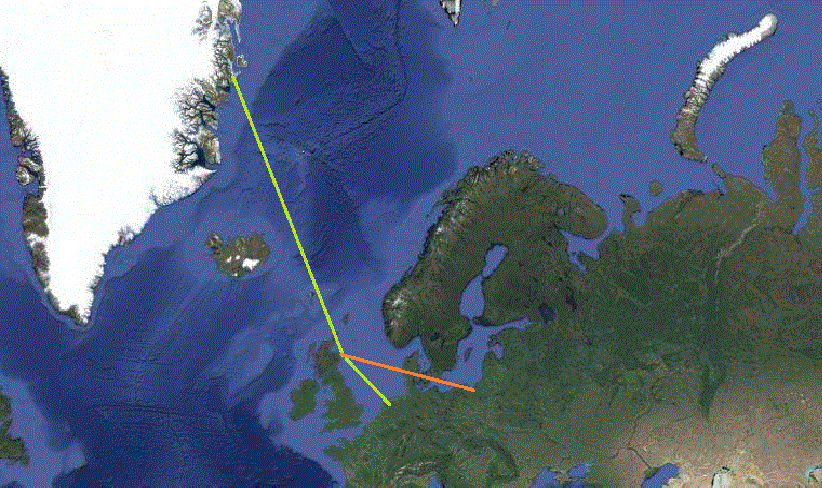 If you are lucky enough to see a colour-ringed bird please report it through http://blx1.bto.org/euring/lang/pages/colour_rings.jsp

Posted by Grampian Ringing Group at 00:39 No comments:

A spot of bad luck!

In the 35+ years since the formation of Grampian ringing group, only a handful of spotted redshanks (probably less than 10) have been ringed by the group. This autumn was quite remarkable for the group as one night while ringing greenshank and redshank a spotted redshank was caught - the first for over 5 years! Only a few days later another two were caught together - all three were juveniles. It is fantastic to see this species in the hand and really appreciate the differences with it's commoner cousins. We were very surprised when we saw the species appear in a recent batch of recoveries. The first of the Autumn, caught on the Ythan Estuary 31 August 2013 had been found dead on the 6th of November on a Nature Reserve near la Rochelle on the West coast of France. This is the first recovery of the species for the group and only the 14th recovery for the BTO ringing scheme.

Posted by Grampian Ringing Group at 10:19 No comments: