Well folks, here's the latest mind-boggling episode on the life and times of 'Mac' our local celebrity drake Mandarin Duck!

Following an email I received yesterday morning suggesting that 'Mac' had possibly been sighted away from the Johnston Gardens area I put out a request for sightings/info to try establish his last know sighting locally.

Amazingly, Vicky Hall (via a local FB wildlife group) has been able to confirm with the aid of the photo below that 'Mac' was present at Walker Dam, Aberdeen, till at least 6.30pm on Thursday 14th April. 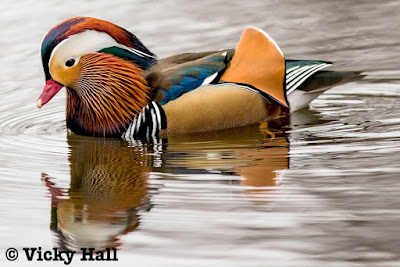 What's more astounding is… just 110hrs (4.5 days) later, at 9.00am on the morning of 19th April, our very own wee 'Mac' was again photographed (see second photo below) but this time the photo was taken by Morten Lie ….have you guessed what's coming next?  Yep, wee 'Mac' has indeed flown back over the North Sea and was snapped by Morten at Krokstadelva near Drammen, just south-west of Oslo!!! How mad is that? 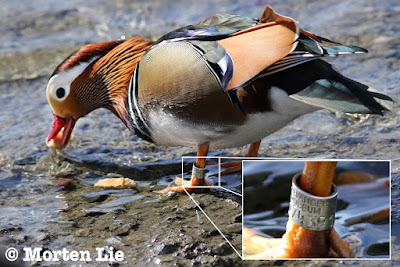 It was major news in the bird ringing world to learn of his initial journey over here last September after being ringed near Oslo last Spring but for him to return there now makes this record truly unprecedented!

It now very much appears that this wee fella has been traversing the North Sea annually, spending his winters here in Aberdeen (since approx. 2011/12) and summering over near Oslo. We'd have known nothing of his amazing adventures and assumed he just moved away from Aberdeen each summer to find a mate locally had he not been ringed last spring near Oslo?

So I wonder what will happen next? I guess we'll just have to wait till later this summer/autumn and see if we can pick up his arrival back in Aberdeen to continue the story?


PS. Many thanks to everyone who's been involved in this story so far, every little bit of information has been a huge help to keep an accurate track of this hyper-mobile wee dazzler!
Posted by Grampian Ringing Group at 15:57 2 comments: