I began colour ringing Rock Pipits in autumn 2009. To date, 146 full-grown birds and 110 nestlings have been “blinged” along the coast. The main study areas are between Pennan and Rosehearty, on the north coast (mainly looking at wintering birds), and Girdleness, near Aberdeen Harbour (where I study breeding ecology).

This breeding season was more productive than the last, despite the “pants” weather, which affected many other species. At Girdleness, numbers of singing males remained low, at just seven. However, all were paired up this year (two did not attract females in 2011). Unfortunately, one of these unlucky males became single again, after his female disappeared in the second week of May.

Better news for “Norman” (Metal/Green Yellow/Yellow), a popular bird, with many sightings from the public last year, singing away under the Battery. After the indignation of a pair nesting on his territory then, that ringed female paired up with him this year, with two of their four nesting attempts fledging young. 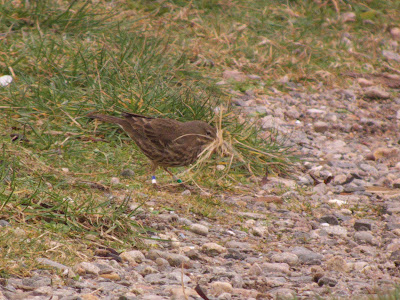 After some nifty hand-netting by Raymond, some spring traps, and lots of luck, we managed to catch a further four of the breeding females on or near their nests, leaving just one unringed. Catch of the year however, was a metal-ringed male, who has been taunting me in the cove under the lighthouse, since the project began. First recorded there on 14/06/2010, he had evaded capture, despite me trapping his two females during the previous two years. 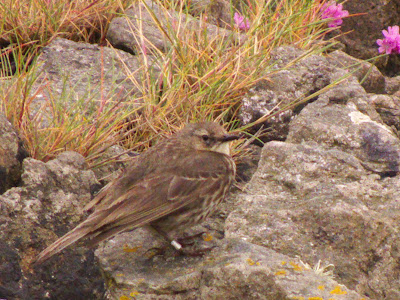 ©AMB NR94975 taunting me with his metal ring in June 2011. The photo wasn’t sharp enough to be able to read the ring number.


With his first brood just fledged, we erected a mist net on his patch, and also decided to set the previously unsuccessful spring traps nearby. Having watched him fly round the end of the mist net, I’d pretty much given up on him again, but this time the mealworms proved too tempting. Success!!! NR94975, ringed as a (big) chick by the group on 27/05/2006, in a nest just 500m away from his territory. He is now sporting a single Yellow ring, on the opposite leg to his Metal (I was unable to add the full compliment of three colours because the metal ring is on the wrong leg). 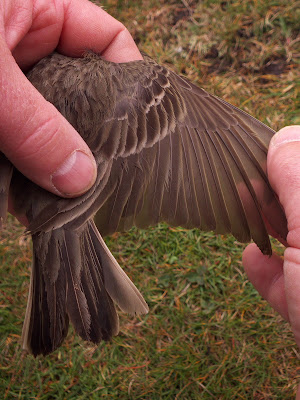 
A star bird for many reasons: he is the oldest bird in the study, although he still has a way to go to break any records (9 years in Britain, and 12 years in Europe). He is the only bird ringed as a chick that I have found breeding. He is also my most productive bird: successfully fledging young from all nesting attempts I have monitored (five in the last three summers).

This year he was paired to the same female as last year. Their first brood had already hatched by the end of April, the earliest I’ve recorded so far. By the end of the season, we managed to find a record eleven nests in the area, six of which successfully fledged young, with fourteen juveniles being resighted so far. Many thanks go to Raymond for occasionally taking off his “Linnet blinkers” this year.

Away from the natal area, I received word from a member of the public of a juvenile photographed at Cove Harbour, 5.4km south, on 16/09/2012. This is the only report of a colour-ringed bird south of Aberdeen. There must be many more lurking down that way, just waiting to be discovered. Fingers crossed for better weather next breeding season, so I can do a proper search “doon sooth”.

Thanks to everyone who reported colour-ringed birds and helped with nest finding.

Next time I’ll fill you in on what’s been happening up north.

Posted by Grampian Ringing Group at 22:46 No comments: 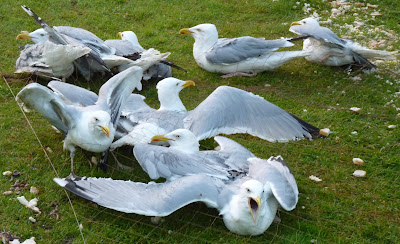 We're now into the second year of the joint Grampian and Tay big gull project, and it's been another successful season. So far this year in Grampian we've colour ringed 280 fully grown gulls, mainly Herring but also the occasional Lesser and Greater-backed. We also ringed 120 chicks on the coast (including these Greater chicks below) 60 of which were colour ringed. 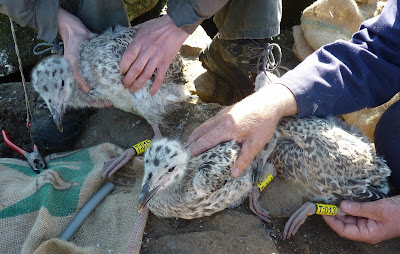 Tay Ringing Group colour ringed 70 gulls in Montrose. The St. Serf's island gull colony on Loch Leven was also colour ringed for the first time, with a total of 150 chicks, mainly Lesser Black-backed. So far we've had five St. Serfs birds seen in Portugal and two in Northwest Spain, one of which was photographed by Manuel Carregal (below). 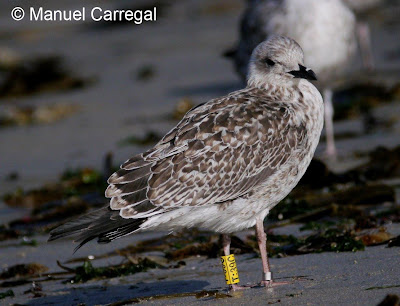 Also this year we started colour ringing Common and Black-headed Gulls for the first time. We've done 160 Common Gulls so far, mostly chicks in an upland colony, and have already got some interesting movements out of them, which will feature in a future blog post. 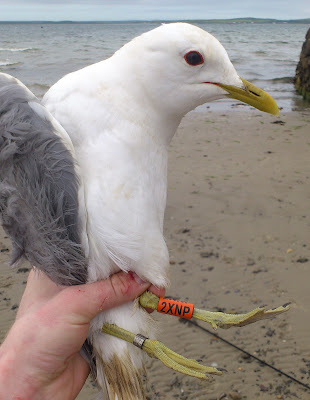 The Black headed Gull colony we regularly ring had poor breeding success, but we managed to ring a few chicks elsewhere, and also mist netted some fully grown birds in the Autumn.  Hopefully we'll get a snowy winter and catch lots more. 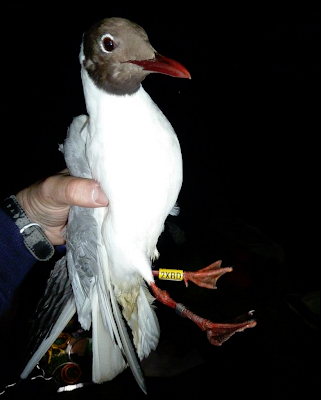 A big thank you to all the ringers and observers who have made these projects possible. Please continue looking out for colour rings.

On boxing day last year, me and Ewan did what most people do, and headed up to Peterhead, with a car full of bread and turkey scraps, to catch Gulls. Unfortunately our net did not fire as intended, and we only managed to catch three first winter Greater Black-backed Gulls. 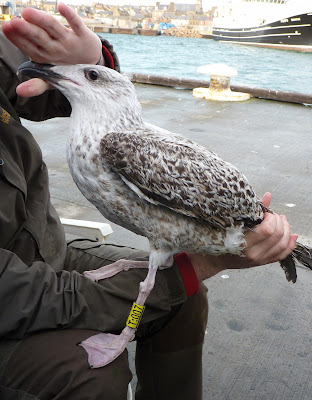 However, our attempt was definitely worth the effort, as we soon discovered that T:007 (above) was sighted in St. Peter-Ording, Germany, only four days after ringing. It doesn't appear to have left since, as we've had sightings throughout the year in the same location from multiple observers, the most recent one being in mid-August. 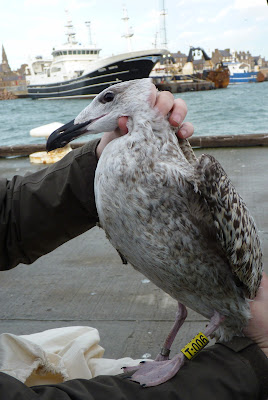 Later in the year we got a report that another bird of the catch, T:006, had been seen in Hirtshals, Denmark on 26th June!  A photograph by the observer, Lars Pederson is below. 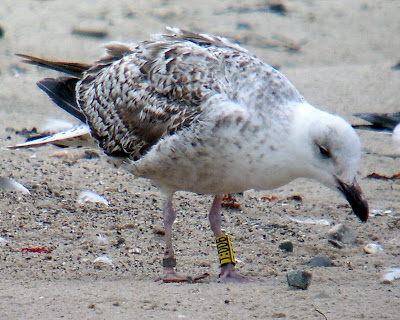 Amazingly that was not all!  Last month a sighting came through from the remaining gull of the catch, T:005, in Hanstholm, Denmark on 13th May. 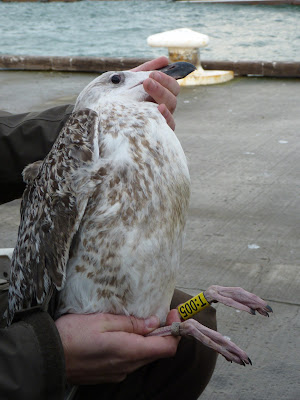 So out of a catch of three birds, we've had a 100% foreign resighting rate! Not a bad boxing day after all! It really shows the benefits of colour rings on these species. All the locations the birds have been seen in are coastal harbour towns, so presumably the gulls have just latched onto and followed boats across the North Sea. 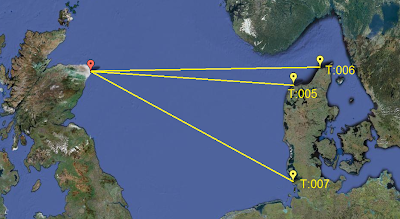 I will put an update up sometime soon about our Gull ringing this year.

Posted by Grampian Ringing Group at 14:56 No comments:

The last time we were in Phil's kitchen we ringed this Scaup, a first for GRG. 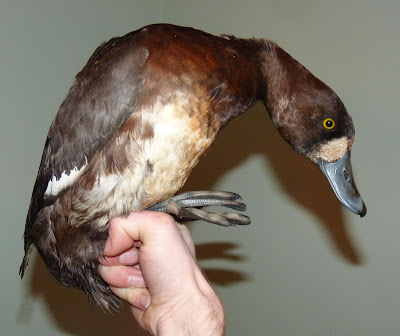 Then today, after a good mornings ringing of 150 finches, Phil called and asked us if we wanted to catch another finch. 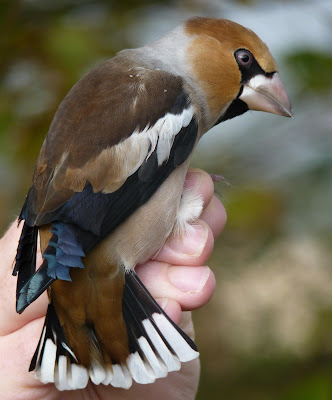 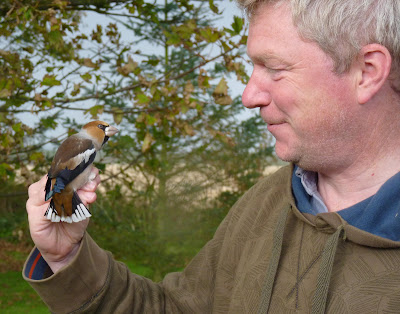 Posted by Grampian Ringing Group at 20:35 No comments:

Colour-ringed sightings in the North East

In addition to the many colour-ringing projects run by GRG, birds of other ringing groups have also been noted in the North East. The following are details of some colour-ringed birds seen this year.

On 11 September a Pale-bellied Brent with two white darvics was seen within a small flock of five on the Ythan. This bird had been ringed at Strangford Loch, NI on 17/10/2005 and during its travels had been recorded in France, Northern Ireland and the Republic of Ireland. This Brent was seen later in the month on the Solway Firth, presumably heading again for Ireland.

Colour-ringed Red Knot are not very common on the Ythan, so when one turned up on 17 August, it was interesting to receive news that it had been ringed at De Richel in The Netherlands way back on 27 July 2001. Also intriguing was the fact that this was the first sighting since ringing – perhaps giving hope for all those ringed birds you have never heard of since the ringing date.

A Black-tailed Godwit observed at the Ythan on 1 September was identified as being from Iceland. This Godwit was ringed at the nest on 1 July in NW Iceland.

On 18 September a Black-headed Gull was seen on the musselbeds of the Ythan. It had a white darvic and had been ringed in Rogaland, Norway on 8 April 2012 (see below map). 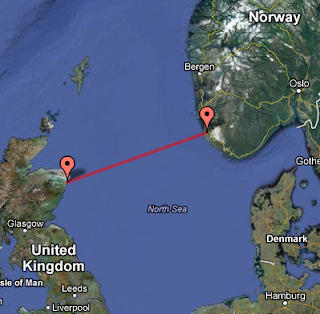 A Kittiwake at the mouth of the Ythan on 21 August had originally been ringed at Lowestoft Harbour on 27 June 2011. This is the second year when a similar bird has been seen in the same area.

Two Herring Gulls were seen on the cliffs north of the Bullers of Buchan. The first, on 13 March, had been ringed on 30 November 2007 at a landfill site near Scarborough, while the second, noted on 13 July originated from Pitsea landfill in Essex. It had been ringed on 27 March 2010 and was previously spotted in northern France (see below map). 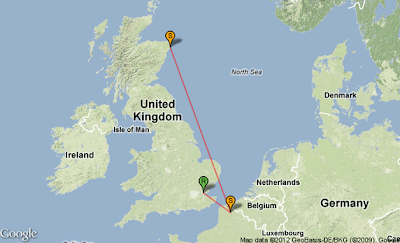 Although many Forvie Sandwich Terns were fitted with rings and darvics and have dispersed, one “foreign” colour-ringed bird was seen among the “local” birds on 24 August and later at Cairbulg on 2 September. This young bird had been ringed in Zuid-Holland, The Netherlands on 19 June 2012.

Posted by Grampian Ringing Group at 13:33 No comments:

Our Cormorants off souff again 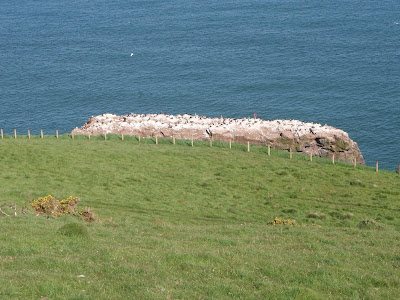 Cormo colony: Trumps 7th green on his new golf course is a bit of a challenge.


Our cormorants are once again going their different ways for the winter. HXY is first off down souff again, reported back on Farmoor Reservoir in Oxfordshire by Paul Willis on 27/9/12 for its second winter and PJB passing through Northumberland for 2nd autumn, seen by Steve Holliday at Blyth Harbour on 4th October.

HXY in its first winter by Matt Prior


Since the project began in 2003, thanks to the many observers who have reported darvic ringed birds, we have been able to build up a very interesting picture of the species winter movements and site fidelity. It’s fair to say our cormorant chicks make a generally southwards but otherwise fairly random dispersal in their first winter. However once settled down at a site for the winter, whether it be close to home, or on an inland water body in central England, or on the east or west coasts, or even further south into France or Portugal, they will then religiously return to this site winter after winter. 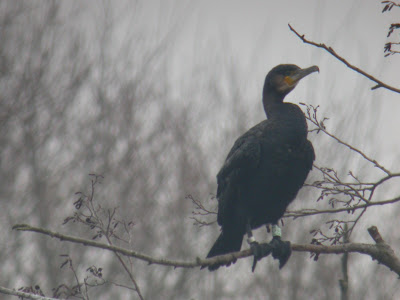 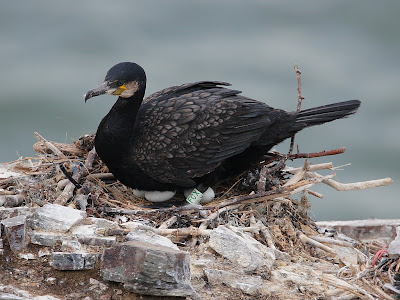 JOCKY” on eggs back at home by Chris Jones.

Thanks very much to all who have reported darviced cormorants over the years. It is hoped to send an updated history of “your” bird to you ASAP to let you know if it was seen back at a breeding colony in Aberdeenshire in 2012. Keep your eyes peeled again this winter please.

Posted by Grampian Ringing Group at 20:23 No comments: