As well as studying the breeding ecology of Rock Pipits, the colour-ringing project looks at movements of the birds. So far the project has discovered:
• Sedentary birds, which remain on territory all year
• Adults which move a short distance from their breeding site to winter on a nearby seaweedy beach
• Local movements between beaches, probably driven by the availability of seaweed (which hosts their invertebrate prey), and/or social interactions
• Daily commutes between a feeding area and a communal roost
• Migration to and from Shetland, and probably beyond

Many (but not all) of the birds breeding at Girdleness, of both sexes, can be found there throughout the year. None have been found elsewhere, as yet.

A special mention should be made of the bird holding the record for the highest number of resightings. 2611107/Yellow Blue/Yellow was ringed as a juvenile male during the first catch of the project, on 26/09/2009, at Aberdour Beach. He has now been recorded forty times since, always on the same beach. Only one of these sightings was during the breeding season (21/05/2012), which is still enough to suggest that he breeds nearby, probably around the inaccessible cliffs to the west of the beach. 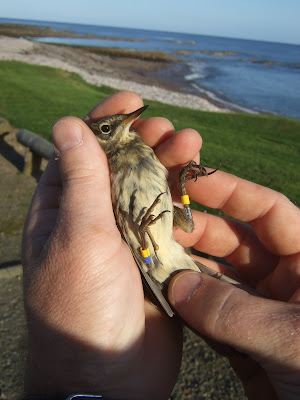 In previous years Pennan has hosted brief sizeable flocks of Rock Pipits during the autumn. Although birds breed around the village, the origins of the birds caught there are unknown. One of these birds, 2611143/Yellow Red/Orange, ringed as a juvenile female on 28/09/2010, was spotted at various locations along the north coast, resulting in an almost-round trip of 34km, ending at Aberdour Beach on 21/05/2012. As with the above-mentioned bird, she was probably breeding nearby. 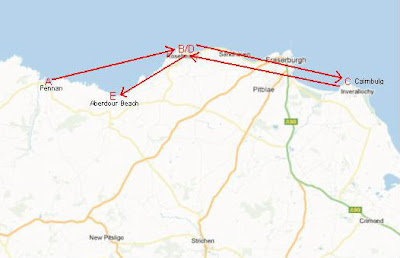 Commuting between roost and feeding area

Communal roosting of Rock Pipits is not well documented. Thanks to the efforts of the “shaggers”, good numbers have been observed appearing in Fraserburgh Harbour on winter evenings, for the last couple of years. It took until autumn 2012 to raise my interest, when a couple of colour-ringed birds were reported. The first was ringed as a first winter female at Cairnbulg (3.5 km SE) on 20/03/2012, and not seen again in the interim. She has not been recorded back at Cairnbulg since. We retrapped her at the roost this February, and she was found 3 days later feeding nearby, on the Beach Esplanade. 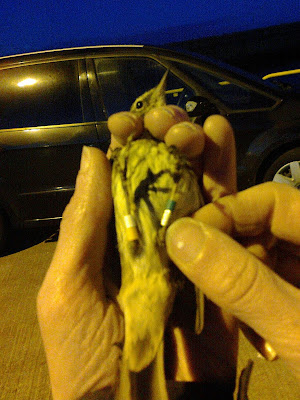 The other bird was ringed as a chick near Quarry Head, Rosehearty (“Nest 1” in my previous blog post), on 20/05/2012, a distance of 9km. It was also photographed a month earlier at nearby Kinnaird Head.

Over the winter, the roost has held between 6 and 18 birds, with 11 so far being trapped and ringed there. Seven have been resighted back there subsequently. There is considerable movement between the roost and Cairnbulg, 3.5 km away. Half of the birds ringed at Cairnbulg have been seen at the roost, with five birds regularly moving back and forth between the two sites. Three birds have so far been observed at both sites on the same day.

To date, 17 different colour-ringed birds have been recorded at the roost, with at least 7 still unringed (and this is probably an underestimate), giving a total of at least 24 birds. 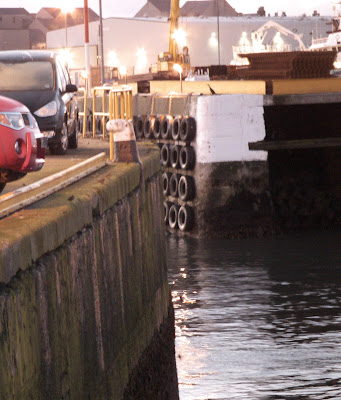 Due to the limited daylight hours of the Scottish winter, the birds have not been arriving at the roost until after dusk. This has made it difficult to observe colour-ring combinations and it is likely that some have been missed. Also, birds may roost in other parts of the harbour, away from the main study area.

The regular migration of Rock Pipits was thought to be restricted to the Scandinavian littoralis race. Although there have been recoveries of Shetland-ringed birds (mainly from Fair Isle) in many parts of mainland Britain, this was thought to be juvenile dispersal, and that the adults remained on their breeding areas all year.

The first, and the longest, of the project’s long-distance recoveries involved only the second bird I colour-ringed myself. 2611110/Yellow Blue/Black, a first-winter, ringed on Aberdour beach on 13/02/2010. Having nearly knocked myself out going to retrieve it from the trap, slipping on rocks (I literally had cartoon Rock Pipits tweeting around my head), I was really pleased to hear from Jason Atkinson on the island of Whalsay, Shetland. The bird had originally been seen breeding at Skaw on 28/04/2010, but was too far away to identify the combination, until it was photographed feeding fledglings on 21/06/2010. I was on Shetland when I heard the news, and waved to the bird as we passed on the ferry to Out Skerries. It was last recorded at Skaw on 26/09/2010 and was not seen back in Aberdeenshire. 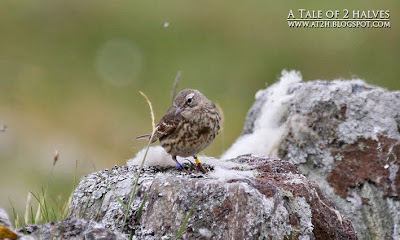 The second recovery involved a bird ringed on Fair Isle on 07/09/2007 and recaught at Aberdour Beach on 20/10/2010, when I was training the newly appointed Fair Isle warden, David Parnaby. 2551461/Green Red/Green was not seen again, until a possible sighting: the briefest glimpse, back at Aberdour beach 1 year and 9 days later. This bird could have been on passage both times it was caught, and was not seen back on Fair Isle in between it’s brief visits to Aberdeenshire. 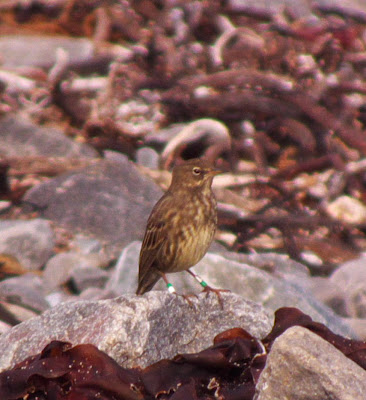 We were alerted to the presence of a metal-ringed bird at Buchanhaven, Peterhead this winter by Ed Duthie, who sent us photo’s of most of the ring number (plus 2 colour-ringed birds). The photos showed that this was an adult. I took my fancy new telescope off to the area and soon located the bird. I felt a bit dodgy peering into someone’s front garden through the ‘scope, but luckily noone complained. I pursued it down the road to get the last digit. I discovered that, although not impossible, trying to read a Rock Pipit metal ring in the field brings to mind a phrase about a headless chicken. 2552406 was ringed on Fair Isle on 15/04/2009, and has been seen four times at Buchanhaven, between 30/12/2012 and 18/02/2013.

A colour-ringed Rock Pipit was reported from a remote part of Out Skerries, Shetland (summer 2011), which probably originates from Grampian. However, without the full combination, it was untraceable.

Next time I will talk about movements of birds ringed as chicks. I’ll hopefully find some breeding, to complete the stories of some interesting movements of these youngsters.