Sandwich Tern tops the list, with 1157 individuals processed, including 93 retraps/controls. 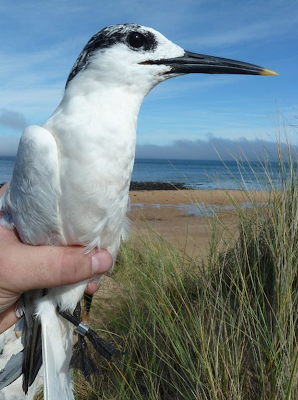 The top 10 pulli species were -

Posted by Grampian Ringing Group at 18:22 No comments:

After a few weekends braving windswept farmland and freezing temperatures on whoosh net expeditions with Raymond, it was time to return to the relative tranquillity and the shelter of the reed bed and carr woodland at Leys.

This has been run as a CES (Constant Effort Site) for the past three years and we occasionally ring here in winter. We expected a quiet morning with mostly great, blue and coal tits. The redpoll tape played all morning and attracted only a single lesser redpoll. 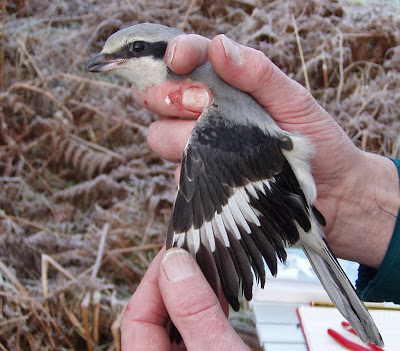 What we didn’t expect was a Great Grey Shrike. We did not see it beforehand but just came across it during a net round. We wonder whether it was attracted by the concentration of birds around the feeder.

We should have considered it a possibility as one (presumably the same bird) was reported on ABZ birds by Paul Baxter at Raemoir Fishery only a few hundred metres away and is thought to have been there since mid December or even earlier. -http://groups.yahoo.com/group/ABZ-Rare-Birds/message/7514 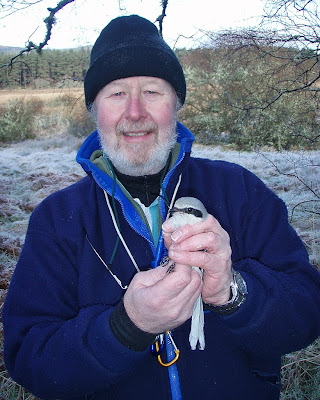 The bird was aged as a first year bird as it appeared not to have moulted any greater coverts or the alula.

In 2010 only 13 birds were ringed in the , Five adults and eight first year birds.

Posted by Grampian Ringing Group at 20:44 No comments: