A tern of 4 countries

It has been a while since we have posted anything on the blog about our sandwich tern study, but this is not due to lack of activity. Our dataset is growing rapidly with the many sightings that we and the birding community have sent to us. Through our tern work we keep in close touch with a number of tern ringers elsewhere in Europe and in particular we have good contact with the Netherlands. A massive population of sandwich terns breed in the Netherlands and each year a significant portion end up venturing up to Scotland in the autumn prior to migrating south. Generally these birds arrive during August and into September, so a portion of the birds we are colour ringing on the Ythan Estuary in autumn breed in these colonies. 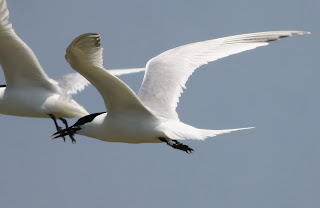 Blue EBA at a breeding colony in the Netherlands (Pim Wolf)
This summer we have had a steady stream of sightings from several observers in the Netherlands including one partial sighting of a colour ring that looked like ELV but as it was at a breeding colony and we could not be 100% certain. Pim Wolf, who had managed to photograph the bird continued to look out to confirm the combination but was unfortunately unable to relocate it in the colony of 3800 pairs. 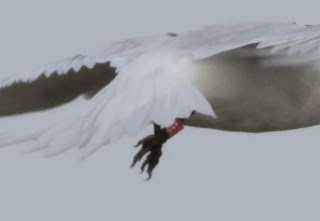 A tantalising glimpse of red ELV in the Netherlands (Pim Wolf)
The trail went cold for a while until yesterday when Pim and myself both received emails from Lee Collins with a sighting of 2 colour ringed birds associating together on Dawlish Nature Reserve in Devon. We were both emailed as the sighting related to one of my birds (an adult -red ELV) and one of Pim’s (a juvenile - white NL1). This chick was ringed at the colony where ELV had been possibly sighted during the breeding season and the close association suggested it was likely to be its fledged juvenile. A further twist to the tail is that when I colour ringed red ELV it already had a metal ring that showed it had been ringed in BELGIUM as an adult in July 2007! 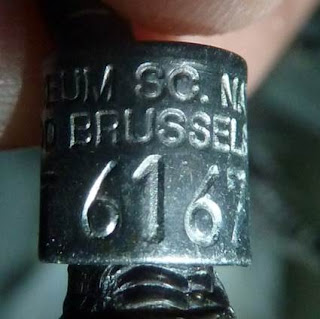 
﻿
Posted by Grampian Ringing Group at 14:35 No comments: