It’s been a month now since the waxwings started arriving in Aberdeen, and over 400 birds have been colour ringed. 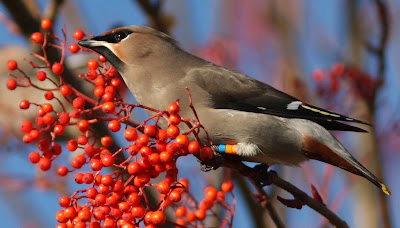 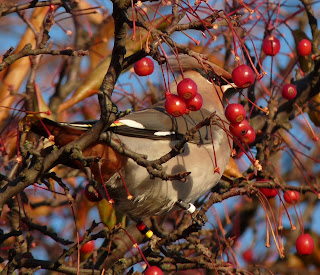 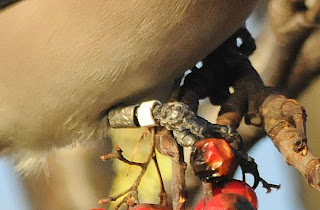 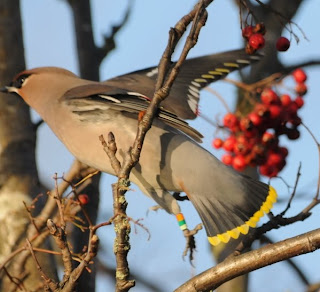 An Orkney bird (triple yellow) turned up and was photographed in George Begg’s garden in Oldmeldrum, a village 30km NW of Aberdeen, at 10am on 21/11. Raymond then saw the same bird 3 hours later on the south side of Aberdeen. 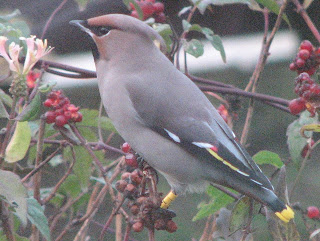 Allenvale Cemetery has been one of the main ringing sites with Lindsay able to look out of his window and call up a few troops for a ringing session when the birds are around. We’ve also had smash and grabs in and around the city but “The Shrine” has come into its own this past 2 weeks with nearly 200 birds caught in 5 visits. Usually this site, with 5 white rowan berry trees, is stripped in a few days a bit later in the season but with wide spread berries still available around town the birds seem to be coming and going here this winter, giving us some great ringing opportunities. 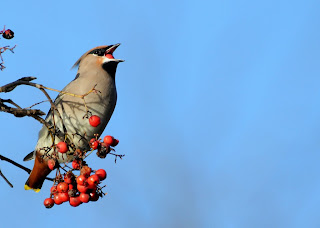 This site was first stumbled upon by Alan Leitch in 1990. He was sacked from his job at the Coop in Westhill after he phoned in “sick” and his boss spotted him out ringing waxwings the same day! Next day he borrowed Raymond’s car, got completely lost in Aberdeen, and had to slam on the brakes as a flock of waxwings nearly hit the car as they flew out across the road from the rowan trees. Alan now lives on Orkney so it is really smart indeed that we have recaptured 2 of the birds he has recently ringed on Orkney at The Shrine in the past 2 weeks.
Thanks very much to Betty Rait and all the other residents of “The Shrine” for allowing us to ring in this rather public site. 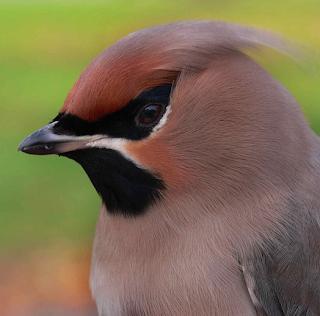 We're now into our second week of catching Waxwings, and have colour ringed over 200 birds. Numbers are beginning to dwindle in Aberdeen as birds move through the country, although we been able to continue catching birds all week. Our second re-sighting outwith Grampian, Green, Red, Yellow was ringed at Dyce on 31st October and was seen in Levens, Cumbria on the 7th of November. Thanks to Robert Polkington for the sighting and photo below. Orkney Ringing Group have also been individually colour ringing birds this year, and one has been re-sighted in Aberdeen. 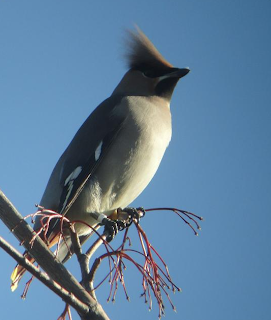 One of the downsides of Waxwing invasions is the birds susceptibility to fly into glass. Obviously there are no windows and bus shelters in the forests they come from, and with most Waxwings feeding in urban areas, casualties are high. We've had one colour ringed bird die because of this so far, and to make it worse it was our Swedish control! It was caught and colour ringed at Allenvale Cemetry on the 5th November and hit a house window five days later at Cragiebuckler. Gutting! We await the original ringing details for the bird.

Hopefully as birds start to move more sightings should come flooding in. Keep checking these flocks for rings! 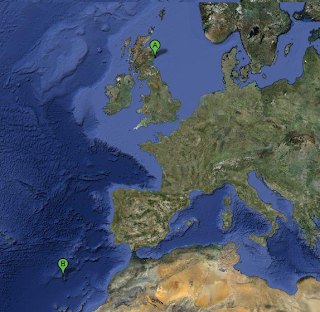 A Greenshank colour ringed (left leg black over blue, right leg red over black) at Montrose Basin on 22nd August last year was re-sighted on Porto Santo (an island of the Madeira Archipelago) on 20 October this year, a movement of 2837 km! This is one of our most southerly Greenshank, with other birds having been seen in Morocco and the Cape Verde Islands. 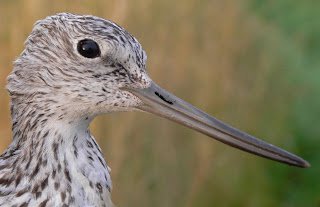 The bird was part of a record catch of Greenshank for us, 34 birds in one night. Unusually it was ringed as an adult, the majority of birds caught on passage are juveniles. 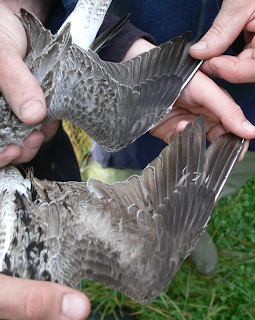 We have been colour ringing Greenshank on the Ythan Estuary as part of a project set up by Farlington Ringing Group since 2003. For the past few years we have also caught at Montrose Basin along with Tay Ringing Group, with last year being our highest ever total.

Thanks to Adrian Aebischer for the re-sighting

We've had our first colour ringed Waxwing re-sighting of the year, outwith Grampian. Red, Yellow, Red was ringed in Ballater on the 30th October, and was spotted by John Nadin feeding on berries beside Dunfermline High School a week later. Below is RYR after ringing along with a photo by John. Several of the birds from the same catch have been re-sighted around Aberdeen. 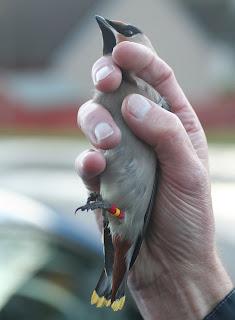 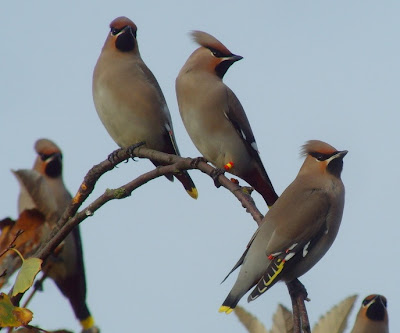 Thanks to John for the re-sighting and photo 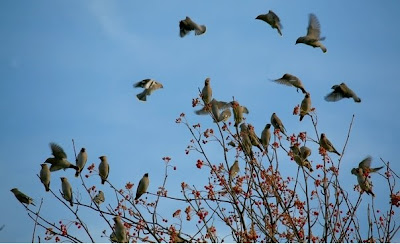 This year’s early invasion of Waxwings has seen thousands of birds in and around Aberdeen, with GRG trying to catch as many as possible. In the past week we have colour ringed 153 birds, with a white ring underneath the metal on the right leg and three colours on the left. Please look out for them. 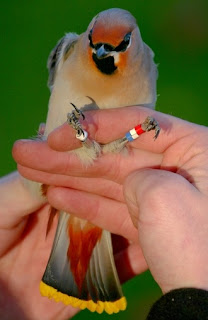 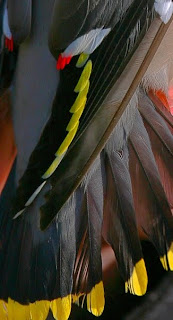 We caught our first control today - a juvenile with a Swedish ring, the third for the UK!! 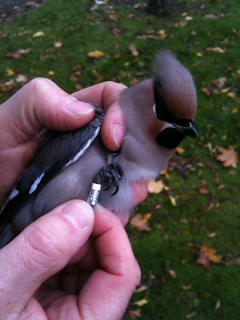 Also caught was an adult female Sparrowhawk, that had been terrorising the Waxwings all day 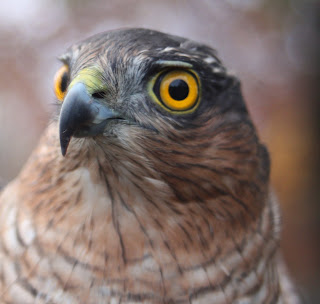 Hopefully we'll get lots more Waxwings this weekend and in the coming weeks, unless all the berries have been eaten by then!

Thanks to Thomas, Bogo and Derek for the photos

Posted by Grampian Ringing Group at 20:47 No comments: